The 1,850-metre-square store for Valentino was designed by David Chipperfield Architects in the former Takashimaya Department Store at 693 Fifth Avenue. 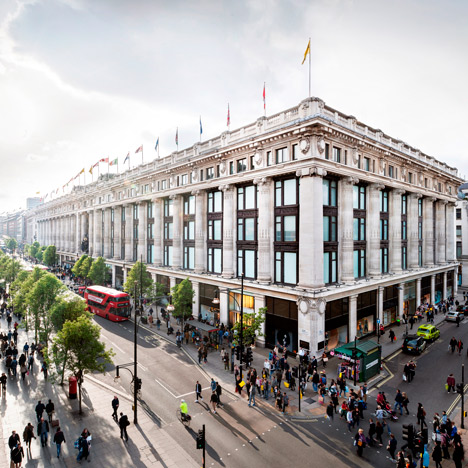 A new eight-storey facade has been added to the Postmodern building, originally designed by architects John Burgee and Philip Johnson.

The lower levels contain the store and are clad with vertical brass bars and incorporate a lantern, a clock and the brand’s logo in the same material.

Behind the frontage is an eight-metre atrium, which features a chunky sculptural staircase that doglegs up and then becomes a series of ramps to connect the three floors.

Grey Palladiana Terrazzo is used to clad surfaces throughout the interior to link the spaces.

“The store concept combines old and new in order to generate a Palazzo atmosphere, steering away from the pure showroom and promoting a new architectural format in place of a more traditional retail boutique structure,” said a statement from Valentino.

On the ground floor, bags are displayed on 39 shelves attached to a wall on one side, illuminated by brass lighting hung from the ceiling.

More accessories are presented on units in the centre of the floor, one in marble and another made from wood and glass, forming the brand’s largest accessories department worldwide.

Womenswear is located on the first floor, broken up into different rooms to separate the types of merchandise.

An area for menswear – the second to be found in Valentino’s US stores after San Francisco – is situated on the top level.

Oak shelving and hanging elements supported by polished brass fixtures are used to display the collection, along with marble plinths.

"A series of pure volumes, such as the marble blocks and free standing marble columns, complete the architecture in a similar way to the ground level, where the new accessories concept is applied," said Valentino's statement.

David Chipperfield has also been appointed to redesign the east side of London department store Selfridges.