After hearing Metronomy's latest track Month of Sundays, Callum Cooper pitched the idea for a video created using spinning camera effects that make the viewer feel as if they're moving. 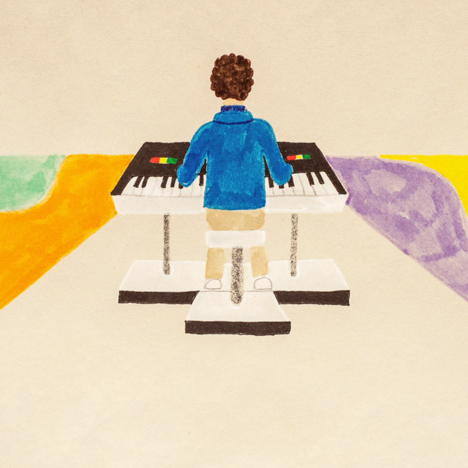 "The effect I wanted to create was that of circular vection or more widely the illusions of self-motion," Cooper told Dezeen.

The video captures the four band members among the raw concrete structures, elevated walkways and curving stairwells of the estate, which was designed by Chamberlin, Powell and Bon in the 1950s and officially opened in 1982.

Clips taken from the tops of the towers and around the communal spaces were merged together to create a perpetual rotating effect.

Dressed in blue jackets and cream trousers, the quartet is shown partaking in simple activities including walking through the environment, leaning over railings, playing catch and releasing a white balloon up a stair atrium.

"The actual form of this video is an extension of a sculpture and video work that I was commissioned to make for the MapMaking Exhibition, which was presented at the Barbican in 2012," Cooper explained.

"This exhibition was a response to the OMA/Progress exhibition and the work was presented concurrently. The OMA exhibition was really my first step into thinking about architectural philosophies and concepts."

His choice of setting for the filming was inspired by the music, which Cooper believes fits well with the Brutalist aesthetic and principles.

"The Brutalist architectural movement was heavily influenced by utopian soviet ideals of living," Cooper said. "It is now hard to see this because the designs seem to hold an obliqueness."

"The general contemporary vision of them has somehow been twisted to be associated more with Ayn Rand than a utopian community ideal. Consequently, these concrete structures, to me, have a melancholic and monolithic feeling to them. Something that for various reasons I felt suited the song."

Without disclosing exactly how the video was filmed, the director said that there are tell-tale signs hidden in the footage.

"I have left hints on how it is made within the video," said Cooper. "You see glimpses of me operating a sculpture that I specifically built to achieve the visual effect."

Filming of the scenes towards the end of the track took place at an old water works at Clapton Ponds, where the concrete structures are overgrown.

Cooper admitted that he would also have liked to film abroad, but that the band was only available for nine hours for shooting.

Month of Sundays is taken from Metronomy's album Love Letters, released in earlier this year.