The new museum was designed by Japanese architect Fumihiko Maki to create a permanent exhibition space for a collection of art and artefacts that charts a history of Muslim civilisations over the last 1,000 years.

Maki, who previously completed the Aga Khan Foundation's Canadian headquarters in Ottawa, imagined the building as a composition of a series of folded white surfaces that centre around a light-filled courtyard.

The Brazilian granite slabs offer a delicately textured facade that could be mistaken for marble. 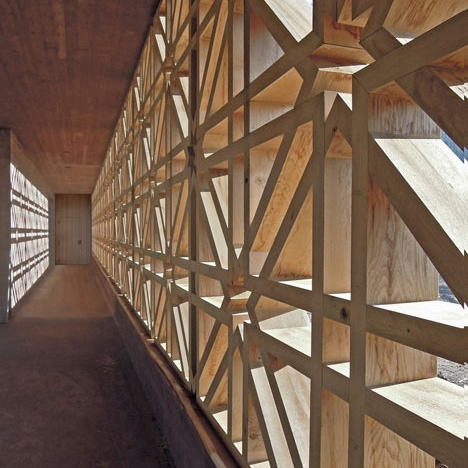 Exterior walls taper outwards at the top and bottom, designed to catch the movement of the sun, while window reveals form deep recesses in the stone surfaces.

A seemingly paper-thin canopy sits within the largest of the openings – an entrance set back so far it creates the false impression that walls are several metres thick.

Inside, the building centres around the double-height courtyard. Glazed walls surround all four sides and are etched with a pattern that references the mashrabiya screens of traditional Islamic architecture.

As the sun moves around the building, these etchings cast intricate patterns across the smooth white interior walls.

Underfloor-heating will help to prevent snow from building up in the courtyard in winter, and water will escape via a star-shaped drain that offers another hint of religious symbolism.

The rest of the floor plan can be divided up into four areas: exhibition galleries, a 350-seat auditorium, educational facilities and a multimedia library.

The galleries, which occupy rooms on both the ground and first floors, start with a permanent space for displaying up to 200 items from the Aga Khan Museum collection.

Ranging from portraits and ceramics, to textiles, books and musical instruments, the collection is largely made up of items that have been gifted to the Aga Khan, spiritual leader of the Ismaili Muslims.

"One of the lessons we have learned in recent years is that the world of Islam and the Western world need to work together much more effectively at building mutual understanding – especially as these cultures interact and intermingle more actively," said the Aga Khan, whose full title is Prince Karim Aga Khan IV.

"We hope that this museum will contribute to a better understanding of the peoples of Islam in all of their religious, ethnic, linguistic and social diversity," he said.

The upper galleries will house the temporary exhibitions, which will be curated using historic, geographic and thematic groupings.

"The Aga Khan Museum has an international outlook," commented museum director Henry Kim. "Home to a collection of astonishingly beautiful works of art, it will showcase the artistic creativity and achievements of Muslim civilisations from Spain to China."

"I think local and international visitors will be greatly surprised when they discover just how much the arts of Muslim civilisations are a part of our shared global cultural heritage," he said.

Skylights shaped into hexagons – a religious symbol for heaven – allow diffused light to filter into the galleries from overhead.

Elsewhere in the building, a spiral staircase also features a hexagonal shape. It leads up to the first-floor auditorium, which sits below a grand six-sided dome.

Fumihiko Maki worked alongside Toronto firm Moriyama & Teshima Architects to deliver the project. Set to open on Thursday, it will be joined by a new Ismaili Centre by Indian architect Charles Correa and a surrounding park by landscape architect Vladimir Djurovic.

Photography is by Tom Alban, unless otherwise stated.