Japanese architect Kazunori Fujimoto used the golden ratio to generate the proportions of this raw concrete house on the seafront of Fukuyama, Japan (+ slideshow).

Named House in Tajiri, the 98-square-metre property is made up of two overlapping volumes that are both square-shaped in plan – one single-storey and one two-storey. 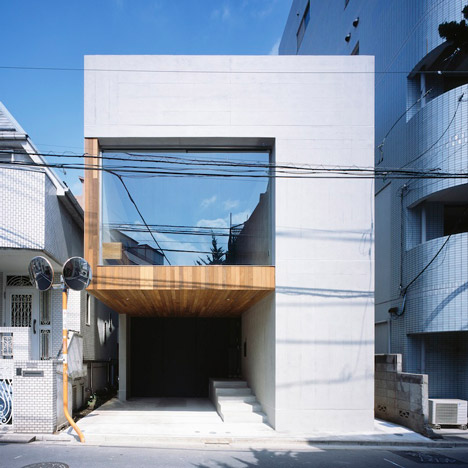 The building replaces a simple old farmhouse, so Kazunori Fujimoto based his new design on the original geometry.

"Before rebuilding, there was the most common farmhouse that had four squarely arranged rooms," said Fujimoto, whose past projects include a concrete house with a walled courtyard and another resembling a half-submerged submarine.

"The principal objective of the design was to develop a concrete house from the traditional farmhouse form."

The architect arranged the two built volumes in a way that allowed load-bearing external walls to continue through the interior as partitions between rooms.

Storage is built into the walls, lining up with the base of windows that extend around all four sides of the house.

"The charm of the old farmhouse is a simplicity, a layout of rooms regarded as a structure together, and the components such as eaves and windows controlling the house's environment," said the architect.

"Because I was going to replace this characteristic with concrete, I thought about a bearing-wall structure that can be open to all directions," he added.

Externally, the concrete wall surfaces are recessed back from the frame to give the building a skeletal appearance.

The entrance is positioned on the northern facade and leads into a long narrow hallway with a staircase winding up through its centre.

A large room to the left accommodates living, dining and kitchen spaces. The bathroom and WC are tucked away at the back, alongside a pair of smaller rooms. Bedrooms can be found upstairs.

Residents can also climb out onto the roof of the single-storey volume, which forms a terrace with views out across the Seto Inland Sea.