Maison&Objet 2014: Roger Arquer has updated an object from his childhood to create Nut Hammer – a nutcracker with a soft silicone head that fits over the end of a hammer – for Danish design brand Menu (+ movie).

London designer Roger Arquer said he wanted to design a nutcracker as a reference to an object from his childhood that he remembered with affection. 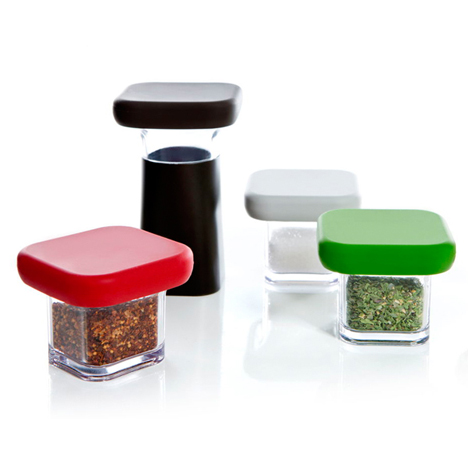 "My uncle had a great nutcracker," said Arquer. "It was a wooden bowl with a protruding island in the middle, where a nut would be held in place. A little wooden mallet would be use to hit the nut. I loved the performance and theatrically of it."

"I wanted to preserve that sense of satisfaction but keeping it in a compact format. The goal was to keep the essence but simplify it and improving it."

His first prototype for the product was made from a cut tennis ball and the handle from a hammer with its head replaced by a piece of hard foam. "It worked really nicely," said Arquer.

Nut Hammer is a hammer-like object with a wooden handle and a stainless steel head.

A round silicon cap can contain nuts of various sizes and fits over the steel top of the handle, so when the user "hammers" it down onto a surface, the nut shell will break but remain contained.

"The main feature of the Nut Hammer is the silicon container," explained Arquer. "It has the strength and flexibility required for this job. No other material could do that so well."

"The head and the handle had to be kept quite generic, to have the historic memory embedded into this new object."

The silicon and stainless steel are also food safe.

Arquer debuted Nut Hammer at design fair Maison & Objet in Paris this month, a year and a half after first meeting Menu at the same event.

The product is his first for the design brand. "We liked each other and a relationship started," explained Arquer. "It tends to be like that. It is all about human communication."

"We want to create objects that perform flawlessly, but also add a great experience to the user," he added. "As I always say: design should tickle the soul. And this is a clear example of this motto."

Arquer's previous designs have included a series of conceptual mouse traps made from everyday items, and a fish bowl with a bath plug drain that "tells us about the power to decide between the life and death of the fish".