A minimal arch frames the entrance to this former farmhouse that architect Manuel Aires Mateus has transformed into a modern retreat in the rural landscape of Portugal's Alentejo region (+ slideshow).

Known as Casa no Tempo, the renovated building is the second holiday home completed by Portuguese architect Manuel Aires Mateus for the brothers João and Andreia Rodrigues, following a pair of reconstructed fishing huts installed in Grândola last year. 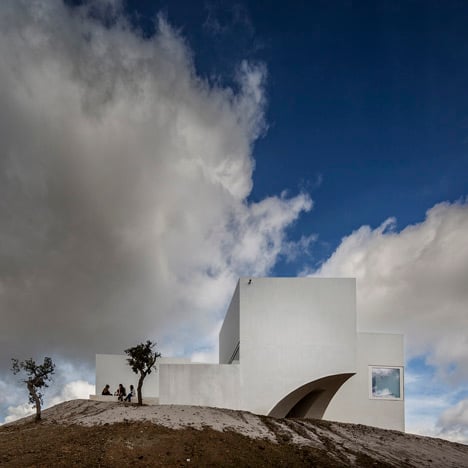 For this project, the architect was asked to restore an old family farmhouse, creating a four-bedroom holiday home set amongst 400 hectares of cork groves, pastures, wildflower fields and lakes, near the village of Montemor-o-Novo.

"Casa No Tempo has been in the family for many years," said João and Andreia Rodrigues."It was our grandad's will that we look after it until the next generation."

"Being aware of his vision we tried to aim higher, connecting the past with the coming future, leaving out the marks of time, in search for a peaceful and timeless place," they added.

With an intervention intended to "reclaim the natural beauty of the rural territory and landscape", Aires Mateus gave the building clean white walls both inside and outside. The exterior facades have been kept free from embellishments aside from simple windows, which are set into gentle recesses.

These large windows help to flood the interiors with natural light, aided by the presence of large openings between the rooms and several mirrors propped up against the walls.

The simple plan includes four bedrooms in total, and a separate lounge. A kitchen-diner sits off to one side, featuring an island workstation with a white marble surface and a grand wooden dining table.

Rustic clay blocks provide flooring throughout and are heated from underneath during the cooler winter months.

Outside, a sunken swimming pool is reminiscent of the topography of a beach. A third structure is also under construction – a walled garden that Aires Mateus claims will be "labyrinth-like".

"The garden will display a palette of visual and sensory experiences, combining and juxtaposing elements to guide visitors through the paths," he said.

Manuel Aires Mateus is one of the two directors of Lisbon studio Aires Mateus – the studio he established with his own brother Francisco. Projects include a nursing home in Alcácer do Sal with a chequerboard facade.