News: Dutch firm UNStudio has developed plans for Qatar's first public railway network in an attempt to encourage more of the country's residents to choose public rather than private transport (+ slideshow).

UNStudio has designed over 30 stations for the Qatar Integrated Railway Project (QIRP), an all-new metro network of four lines that will connect destinations in the Greater Doha Area and the coastal city of Al Khor. 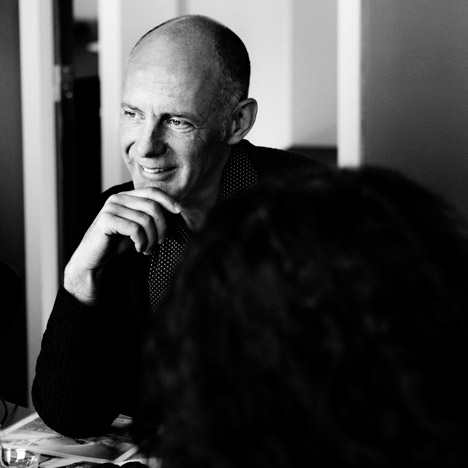 Architecture "is still in the Walkman phase" - Ben van Berkel

The goal is "to create a service which encourages the use of public transportation as a valid and clean alternative to private transportation for the population of Doha".

The first phase of the project involves the construction of approximately 35 stations all designed by UNStudio, which has been appointed principal architect on the project. For phase two, a further 60 stations could be added.

The team – whose recent projects include an airport in Georgia and a shopping centre in China – have developed a system of architectural branding designed to create distinct identities to station, line and the network as a whole.

This includes recurring architectural elements across the network, themes for different lines and a selection of curated content for individual stations.

An "architectural branding manual" produced as part of the project will offer guidance to design-and-build contractors implementing the proposals.

"Through the production of a design manual and with the use of adaptive parametric design, it has been possible for us to create a design with many variants, yet one which maintains a coherent identity throughout all of the stations," said studio founder Ben van Berkel.

"In this way, we can combine local contextual differences within an overall identity and parametrically adapt physical factors such as wayfinding, daylight penetration, passenger flows, constructive elements etc. in a complex but extremely disciplined system."

UNStudio also plans to introduce elements from the traditional regional architecture. Vaulted ceilings will be a consistent design element, thought of as a "referential bridge between Qatar's historic architecture and culture and its future as a beacon of innovation and prosperity".

Strips of lighting integrated into the vaulted surfaces will function as natural wayfinding elements.

The team names one of their inspirations for the project as the Caravanserai – a kind of inn found on ancient trade routes, which often featured enclosed courts that served as both gathering and resting places.

"The celebration of arriving and departing has always been found in the design of stations," said Van Berkel.

"For the QIRP we devised an adaptive parametric system which creates open, light and welcoming interiors for each of the individual stations. Traditional Qatari architectural features are reinterpreted to incorporate new, transformative qualities which capture daylight and direct this into the interiors, creating uplifting and luminous atmospheres," he added.

The project will also include creating safe crossings over busy road intersections.