The creators of a flying car called AeroMobil say that transport networks are "in crisis" and suggest that a potential solution could be shifting road traffic into the skies (+ movie).

The designers of the AeroMobil, a working "pre-prototype" for a flying car, claim that the vehicle is the "ideal solution" for mid-range journeys and could offer a solution for the congestion problems faced by road users globally.

"Most of the personal transport solutions in the world are in crisis," Juraj Vaculik, CEO of the company, which is also called AeroMobil, told Dezeen. "I think if we can shift some of the road traffic to the air it can make personal transportation more efficient and sustainable."

"A flying car is the ideal solution for middle-distance travel of up to 700 kilometres," industrial designer and chief technical officer of AeroMobil, Stefan Klein told Dezeen. "According to our calculations, there is no better or more efficient solution for door-to-door travel."

In development for the past 14 years, a "pre-prototype" of AeroMobil known as version 2.5. was tested on roads and in flight for the first time late last year. The car was able to take off – reaching speeds of 130 kilometres an hour to do so – before flying a short distance and landing successfully. 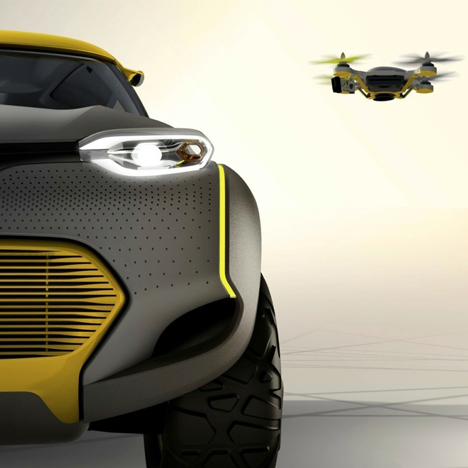 The design for AeroMobil 2.5 features a set of wings that extend outwards from the car's body for take off, with a propeller at the rear to provide additional lift. This iteration of the vehicle weighs 450 kilos and is able to achieve an air speed of more than 200 kilometres per hour. According to its designers, it is able to fly for a distance of 700 kilometres, consuming 15 litres of fuel per hour, and has received airworthiness accreditation in Slovakia where the project is based.

The company plans to publicly demonstrate version 3.0 of the two passenger vehicle in Vienna later this year, with improvements including a carbon body, a refined wing design and a revamped on-board computer.

"We were able to move from last year's pre-prototype to this version in nine months thanks to extensive digital prototyping and extensive experience we had from previous concepts and pre-prototypes,"  Juraj Vaculik said. "We would like to start taking pre-orders in the near future."

Vaculik described the car as "a whole new category" of vehicle.

"A few experts call this category 'roadable aircraft', the public likes to call it 'flying car'," said Vaculik. "In fact, it is a new category for which we might not have a name yet."

Klein said the project was inspired by pioneering aviator Antoine de Exupéry and science-fiction novelist Jules Verne, but the vehicle would face real-world challenges with regulatory bodies before it could become a reality.

"Combining two different worlds of automotive and aviation design is one of the biggest challenges, but we feel confident that this one is solved with our prototype," Klein said. "Our next challenges are mainly regulatory, because a category for a flying car does not exist."

Read our interview with Stefan Klein and Juraj Vaculik from AeroMobil:

Stefan Klein: The inspiration came from the flying itself. It's a beautiful combination of passion, freedom and technology. When I speak about inspiration, I usually mention Jules Verne, Saint Exupery or professor Sekanina, who wrote a book about the sports aircraft construction in Czech Republic. There was also lot of inspiration in my own family. My grandfather and father were pilots.

Juraj Vaculik: Maybe the biggest inspiration came from the freedom for flying. The whole AeroMobil project reflects all the dynamic changes in the aviation and automotive industries. We see extreme development in the supporting industries overall – from engines to carbon body parts and control systems, which will allow autonomous flight and driving in the future.

Tamlin Magee: How far are you from releasing an actual car to the market?

Juraj Vaculik: We have just finished our prototype of AeroMobil 3.0 which features full carbon body, better set-up of wings and completely new avionics. It looks really beautiful and our whole team is very proud. We were able to move from last year's pre-prototype 2.5 to this version in just nine months thanks to extensive digital prototyping and extensive experience we had from previous concepts and pre-prototype.

We'll introduce our new prototype later this year during a public event in Vienna and we would like to start taking pre-orders in the near future.

Tamlin Magee: Could you talk me through the process of creating the AeroMobil?

Stefan Klein: The development of AeroMobil from the sketches to last year's pre-prototype took 15 years. Before our 2.5 model we had several concepts, one without the wings transformation and one, which transforms itself from car to plane and vice versa. Last year, after our presentation at the SAE Aerotech congress in Montreal, we received a lot of acknowledgment and we decided to accelerate the process of creating this new prototype.

AeroMobil 2.5 was a vehicle dedicated mostly to examine the characteristics of the object. We achieved stable flight and tested very innovative take-off method. Of course, in the close future we will be testing many other options for the engine including hybrid, transmission, wings profiles to achieve better capabilities, speed and power.

Juraj Vaculik: Our main task is to develop a really integrated solution for personal transportation. AeroMobil as a flying car is just the start. In the long term, current transport infrastructure will not keep up with the population growth and demand. Most of the personal transport solutions in the world are in crisis. Commuters are imprisoned in traffic jams. Building more roads mean more cars. Over the next 20 years, more cars may be built than in the auto industry's 110-year history. Traffic jams and congestions in cities lead to economic losses. This situation is not getting to be better. According to the World Bank, cities are expected to hold 5.2 billion residents by 2050. Even more people live in large cities – 221 cities with more than 1 million people in China by 2025 vs. 35 in Europe today.

In the area of commercial air travel the setting is very similar. More than twice the population of China travels by air every year (2.8 billion). Almost a quarter of all flight arrivals are delayed and approximately every fifteenth flight is cancelled. Commercial airports are not keeping up with the demand and are getting deteriorated.

I think if we can shift some of the road traffic to the air we can make personal transportation more efficient and sustainable.

Tamlin Magee: Who do you foresee as the AeroMobil customer?

Juraj Vaculik: We have created a broad roadmap for AeroMobil. There will be early adopters for the limited edition of luxury flying supercar. Also we expect demand from the private and recreational pilot community which recognises the benefits of door-to-door transport, with AeroMobil you don’t need to hangar the aircraft.

Tamlin Magee: Why a flying car?

Stefan Klein: Overall, personal transport has lost its emotion. It does not have sense having luxury car stuck in the traffic and similarly having a 1st class air ticket for cancelled flight.

Flying car is the ideal solution for middle-distance travel up to 700km. According to our calculations, there is no better or more efficient solution for door-to-door travel.

Combining two different worlds of automotive and aviation design is one of the biggest challenges, but we feel confident that this one is solved with our prototype. Our next challenges will are mainly regulatory, because category for flying car does not exist.

Juraj Vaculik: We see AeroMobil as a whole new category with its own specifics. Few experts call this category "Roadable aircraft", public likes to call it a "Flying car". In fact, it is a new category for which we might not have a name yet. It is similar situation as with the motorcycle category, which some time ago created crossover in between bicycle and car. These category related specifics will determine also its selling process. From the beginning we'll need certification for both aeroplane and car, but for the future we will need a legislation for the new category.

Tamlin Magee: Do you foresee any problems with air traffic regulations?

Juraj Vaculik: AeroMobil is being built into existing regulatory environment. Also, with previous pre-prototype we passed all the tests for airworthiness and we are currently busy to make it compliant with M1 automotive category. Airspace is very well organised thanks to international agreements and organisations like ICAO, EASA or FAA.