This extension by French architect Clément Bacle mirrors the size and shape of the original brick house it adjoins, but uses modern materials to distinguish it as new (+ slideshow).

House Between the Two was designed by Nantes-based architect Clément Bacle for two sisters. One, who previously lived in an apartment, saw an opportunity to build a detached house in the other's long back garden in the north-western city of Rennes. 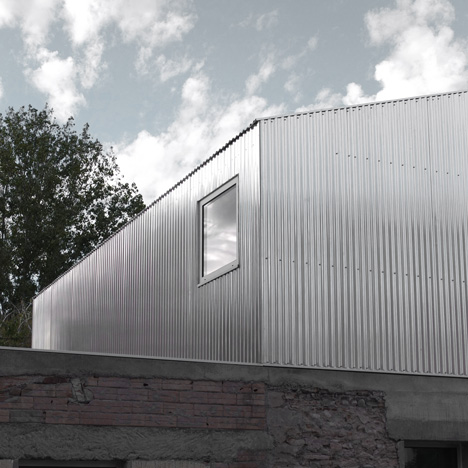 The new addition provides 85 square metres of space, with a kitchen-diner and living room on the ground floor, and a bedroom and bathroom on the first floor. It is connected to the original house by a corridor, so the two sisters can pass easily between each other's homes.

A glazed, pitched roof has been added above shared space between the original house – built in 1905 – and the extension, bringing more light into both homes from the east and west.

"The sisters came up with this idea for the shared canopy, and were also able to share the construction costs," Bacle told Dezeen. "In the future, they could remove the door between the old house and the new space to make the spaces separate again."

Painted concrete has been used for the flooring of the extension's kitchen and living room, and three cupboards have been added beneath the stairs, as well as three bright-coloured open boxes for storing letters, bills and keys.

"The owner wanted a bright space with a small kitchen and a flexible space for entertaining guests," explained Bacle. "The hardest part was to maximise space within the pitched-roof shape, especially upstairs."

Externally, the new addition is clad in black-stained Douglas fir, and two dormer windows have been finished in stainless steel.

"The choice to make the extension a mirror of the original house was obvious. I love the idea of offering a contemporary version of a home from the early part of last century," said Bacle.

"The slate roof was required in this area, while the black wood creates a contrast with the garden, and recalls Breton sheds," he added.

Photography is by Martin Argyroglo.