This house on a narrow site by German office Philipp Architekten follows the slope of its hilly location with a series of stepped levels (+ slideshow).

House M was designed by Philipp Architekten for a couple with two young children. 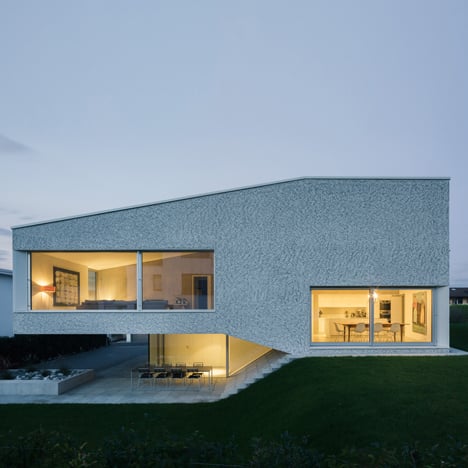 It occupies a narrow, hilly site at the foot of the Swabian Alps in Balingen, Germany, with a single-storey entrance that opens up to three storeys deeper into the plan.

"The brief was to create a light-flooded living space for the family, their art and their books," architect Anna Philipp told Dezeen.

"Due to the vertical block, the villa appears to be a tower from one side, housing an extensive library which extends over two floors," she said.

A white plastered facade has been added to accentuate the home's pared-back form, with an algae-resistant coating to minimise maintenance.

"The building has been designed to have a purist and sculptural character – less is more," said Philipp.

"The vertical cube at the back and the horizontal glass volume at the front gain maximum expression through the reduction of materials."

Glazing and terraces have been concentrated along the southern facade to maximise exposure to the sun throughout the day, with large sliding doors providing access between the indoor and outdoor spaces.

A pond was also added to the southern side to help frame the house within its setting, and to reflect light and shadows inside.

Rooms in the 33 metre-long house have been divided into two zones. Social spaces run horizontally along the upper-ground floor, while the more private spaces are arranged vertically across the upper and lower levels at the back.

"The family like coming together with friends and family, but also wanted a sheltered retreat for privacy," said Philipp.

The dining room, kitchen and living room follow a linear sequence from the entrance on the upper-ground floor. Three bedrooms sit on the lower-ground floor, with direct access to the terrace and pond.

A study with a double-height library occupies the top two levels of the house, which replaces an old printing office on the site.

"The family is in the publishing business, and not only has a passion for books, but also a huge collection. It was their wish to live with the beauty of these books," said Philipp.

A band of skylights runs through the centre of the house to bring more light into the middle, and give the interior "a museum-like character", according to the architects.

A void has been also cut between the living room and the floor above to make room for a large artwork on the wall.

"The family's passion for art and graphic design was central to the design throughout the house," said Philipp.

Ingo Maurer's Zettel lamp, which features 80 sheets of printed and blank paper, hangs in the centre of the dining room.

White dominates the interior scheme, apart from the kitchen, which has been conceived as a black box to contrast with the rest of the house, and one of the bathrooms, which features walls covered in gold expoxy resin.

Photography is by Udo Geisler.