Solid panels, perforated screens and recessed balconies create a patchwork of varying transparency on this tower that rises up from one side of a mixed-use development in Nantes, France, by Antonini Darmon Architectes (+ slideshow).

Known as Oiseau des Iles, which translates as Bird Islands, the 10-storey structure creates 30 social housing units and 600 square metres of commercial space at a site on the fast-developing western tip of île de Nantes. 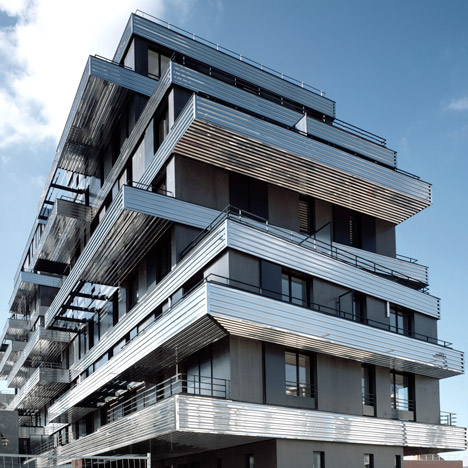 Conceived by Paris-based Antonini Darmon Architectes to become a local meeting place, the building constitutes two parts – a timber-clad base accommodating the shop units and car parking, and a residential tower with a gridded structure.

"The great strength of the program and of its articulation resides in the duality which exists between the telluric plinth, a monolith on a pedestrian scale, and the community accommodation that rises up out of this block," said the architect team.

The tower comprises an asymmetric volume that rises up to a point. It slightly overhangs the edge of the podium below, creating the impression that it has been precariously balanced on top.

The gridded facade is framed by steel beams, which sit proud of the facade to create balconies around the entire perimeter.

Some sections of the grid have been infilled with solid panels, while others are open or screened by perforated aluminium shutters.

"The community building is a slender volume rising towards the sky where it culminates in a point, a steady prow, proving to be simple but strong," said the team.

"Echoing the urban thread, the facade receives a skin-like surface, an almost living mashrabiya or lattice work, alternating between solid, void and the movement of the shutters as they are opened and closed," they added.

The angular roofline of the plinth create an elevated topography overhead, with a decked timber ground surface. This is interspersed with planting areas that will eventurally frame the tower's first-floor entrance.

A total of 24 apartments are housed within the nine storeys of the tower, while six additional duplex homes run around the south and east sides of the plinth, each featuring their own small gardens.

Photography is by Alexandre Wasilewski.