Her idea was to harness this effect to create a lighting fixture that could be activated by movement, rather than with electricity. She calls it Ambio. 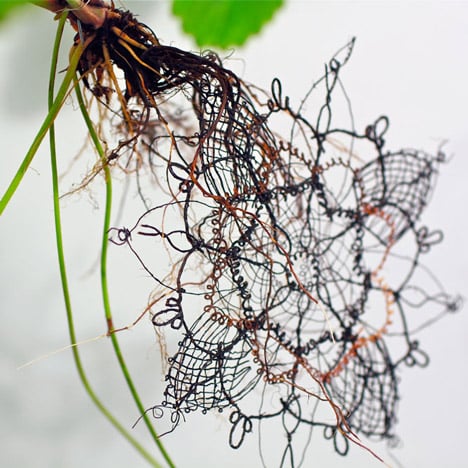 Genetically engineered crops could grow lace amongst their roots

"For a while now I have been doing research into new forms of light and energy," said the designer, who studied biology before embarking on a career in design. "My goal is to create a living lamp for the home."

Although there are many different species of bioluminescent microorganism, Van Dongen selected one that can be scraped off the skin of an octopus – a decision influenced by both the degree of luminescence, and whether movement resulted in either a pulse of light or a longer reaction.

Working with two students from TU Delft's life science department, the designer has produced a prototype comprising a tube of artificial seawater suspended between two brass weights. A wool cap ensures a regular stream of oxygen.

A gentle nudge of the lamp disturbs the bacteria, causing it to glow. The weights will prolong this movement, keeping the lamp illuminated as long as possible.

The drawback of the design at present is that the microorganisms can only live for two days before they either run out of nutrients or multiply too much for the tube. The team is currently working on a solution that will extend their lifespan.

"Our aim is to create an installation where new medium with nutrients – liquid food – is constantly added to the fluid with bacteria while the abundant amount of fluid is constantly drained, without using electricity," said Van Dongen. "In this way we can theoretically keep the population alive for an eternity."

Photography is by Hans Boddeke.