The rooms of this house near Seoul by local architecture office Praud are contained within a slanted box that rises above the mountainous landscape (+ slideshow).

The Leaning House is positioned on a hilly site close to the Chungpyong Lake and was designed by Praud as a weekend residence for two retired professors based in Seoul who wanted a natural retreat where they can write, research and hold small seminars. 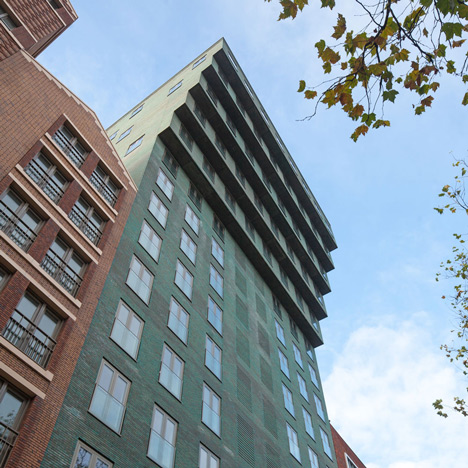 NL Architects completes turquoise tower that leans over towards the top

The orientation of the building was determined by the desire to make the most of views towards the lake and a nearby river, while the sloping shape maximises the surface area that is exposed to southern sunlight.

"Following the existing topography of the site the house had to face the east rather than south, but at the same time we did not want to lose the advantage of southern exposure so we tilted the mass and gave more face to the south," architect Dongwoo Yim told Dezeen.

The angled profile also enabled the creation of an interior uninterrupted by partitions that accommodates a family room, reading area and bedroom connected by a stair lining one wall of the building.

"As the client couple have lived in apartment type for years, we thought it is important to provide a different type of spatial quality from what they can expect from typical apartments in Korea," Yim explained.

Ascending from the family room at the rear of the ground floor, the staircase reaches a reading room that wraps around a mezzanine level lined on one wall with a low bookcase.

The interconnected nature of the ground floor and mezzanine mean it can be used as a venue for seminars or presentations, while the house's slanted rear wall provides a surface for projections that can be viewed from the reading room.

A shorter set of stairs continues from the mezzanine to the master bedroom, which extends along the length of the building's short section and opens onto a balcony at the end of the cantilevered volume.

The vertical glazed wall lining the bedroom enabled the building's total floor area to remain within regulated limits and provided a strip of outdoor space for the balcony.

The cantilevered section of the building is supported by a box below accommodating the entrance and a living room. A glazed wall incorporating a sliding door opens onto a deck sheltered beneath the overhang.

Yim said the living or reception space was important to the project as it is a traditional feature of Korean houses that has been lost with the rise of apartments that merge these rooms with the main family areas.

"As the apartment became the dominant housing typology in Korea, these distinguished spaces are merged into one single living room, which is one of the reasons why you don't invite guests to your apartment that often anymore," said the architect.

"By giving the open space as family room and having underneath the overhanging space as a living room we were able to distinguish these two separate types of spaces," he added.

The contrast between the low-ceilinged living room and the double-height family space containing the kitchen and dining area also helps to emphasise the transition between these two interconnected but functionally separate rooms.

Zinc panels clad the entire exterior of the slanting box, giving it a homogenous and solid appearance. Timber was used for details including the decking, the rear wall and interior surfaces to create a warm contrast to the metal shell.