Fashion and technology: a Dutch team is presenting a garment that purifies the polluted air surrounding the wearer, at this week's Beijing Design Week.

Designers Borre Akkersdijk and Eva de Laat collaborated with Martijn ten Bhomer from the Eindhoven University of Technology, Daan Spangenberg Graphics, StudioFriso and Want to create a one-piece suit that has electrical threads woven into the fabric, enabling it to provide GPS, Wi-Fi and air-cleaning technologies.

"The BB.Suit started because everyone was talking about wearable technology, the bracelets, the glasses," Akkersdijk told Dezeen. "We thought about how we could really integrate the electrical threads and sensors and not just stick them on."

The BB.Suit uses cold plasma technology to create a bubble of clean air around the wearer. 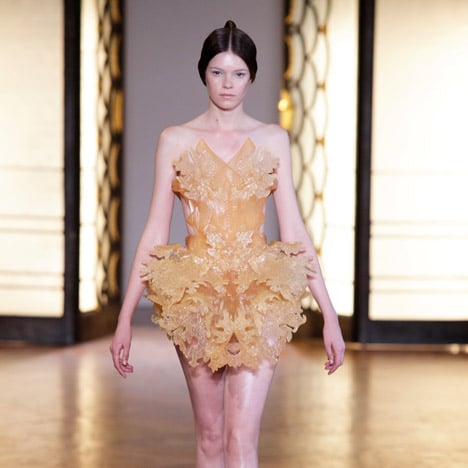 An air-quality sensor integrated into the suit counts the particles of carbon monoxide, methane and dust around the body.

The first iteration, presented at SXSW earlier this year, featured the GPS and Wi-Fi capabilities, but the team decided to tackle a local problem when developing a garment to show at Beijing Design Week.

The electrical yarns are woven into the body and knee-length legs of the single clothing item, which zips up the front, while the long sleeves and a hood are formed from standard textiles.

The air quality sensor is located at chest level and is connected to a hidden platform chip that tracks and transmits the data. The chip is also wired to a battery and the cold plasma node on the back of the suit.

Although safe and fully functional, the garment was created as a step towards a connected wearable platform rather than a product to be marketed.

"We can't currently sell the suits, because it's way too difficult to wash them, but it's the first step," Akkersdijk said.

The BB.Suit is on display in the Dashilar hutong district of the Chinese capital for Beijing Design Week, which runs until 3 October.

Photography is by Benoit Florencon.