Each piece in this "unnecessary" cutlery set by Israeli designer Lee Ben David has been shaped for use with just one specific type of food.

For her Very Specific collection, Lee Ben David produced a range of stainless-steel contraptions featuring attachments that make them suitable for eating foods that include artichokes, spaghetti, salad and edamame beans. 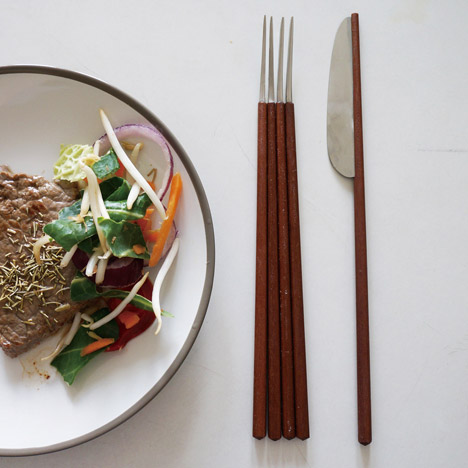 The designer's aim was to highlight the unnatural disconnect she believes cutlery creates between diners and their meals.

"When it comes to food, one of our most elementary and instinctive needs, we use cutlery as an extension of our body, avoiding the touch of food with our bare hands," Ben David told Dezeen.

"We seem to forget how much fun it was as kids to eat cake with our bare hands," she said.

While researching the cutlery set, Ben David encountered an "absurd" amount of variation in the cutlery used in formal dining, such as a knife designated only to fish dishes and the salad fork.

A fork with a clamp attached to one side is intended to catch the loose ends of spaghetti to spare the eater indignity, while a pair of hinged knives deal specifically with too-hot pitta bread.

Ben David also combined a knife and fork in a utensil designed for use at cocktail parties. The knife and fork lever can be operated by one hand, leaving the other free to hold a plate.

The final pieces are a potato-peeler shaped implement devised to extract edamame beans from the pod, and a double-ended trowel and prong set designed to pluck the leaves and scoop the flesh from artichokes.

"There is a type of product that you don’t really need, but you still want. I hope people will respond to my cutlery set with a smile, that might arise from their sense of criticism. Some people will laugh and others will want the product," she said.