The Sendagrup Medical Centre occupies the 556-square-metre ground floor of a building in the Zuatzu business park in northern Spain. 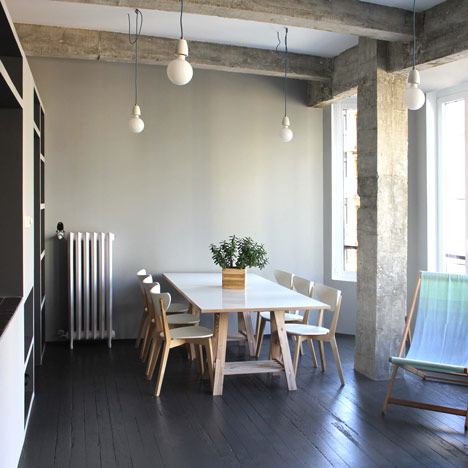 Apartment in San Sebastian by Pauzarq

"Originally the place was completely empty and Sendagrup Medical Centre asked us for a bright and spacious place where patients can be oriented easily. We have looked for a timeless character, elegant but not going out of fashion," Pauzarq co-founder Elena Usabiaga told Dezeen.

Pauzarq designed the clinic around a central block containing toilets, a meeting room, a kitchen, two changing rooms, an X-ray room, a store and a room dedicated to plaster treatment. This service island is flanked on either side by a row of consultation rooms clad in contrasting materials.

The middle area and a set of consultation rooms that run along the south-eastern side of the building are constructed from a fir timber frame in-filled with a double layer of glass.

The architects used U-glass – a type of glass known for its structural strength, light diffusion and sound insulation properties – to ensure privacy for the clinic's patients.

"The poles or vertical wooden elements have a dual function," said Usabiaga. "First they give stability to the pieces of glass and on the other side they are used to hold the wooden panels inside. Also they serve to mark an interesting vertical rhythm."

The translucent glass allows light to pass from these rooms into the corridors around the central area.

The six glass rooms are arranged in pairs, each sharing an adjoining wall. Sections of maple panelling along these walls surround examination tables to create an opaque partition.

"This generates an interesting play of transparencies and opacities from the corridors similar to typical folding screens," Usabiaga said. "The materials generate different textures and reflections and contrast between the coldness of glass and marble and the warmth of wood."

Along the north-western facade, five more consultation rooms are constructed from locally sourced black marble flecked with grey veins. The "heavy and dark" material offers a stark contrast to the light-filled rooms opposite.

Pale wooden doors punctuate the black facade to pick up on the fir framework that makes up the rest of the space.

All of the rooms open out directly onto a circulation area, which flows around the central island to "create a sense of spaciousness" and to help patients navigate the space.

Waiting areas located between the glass rooms cluster below Perspex signage with black letters that stand out against the neutral toned backdrop, while signs on the marble rooms are lit by individual wall-mounted lamps.