Design Research Studio created the interiors for the 359-room hotel, which occupies the south wing of Sea Containers House located between the OXO Tower and Blackfriars bridge on the south bank of the River Thames. 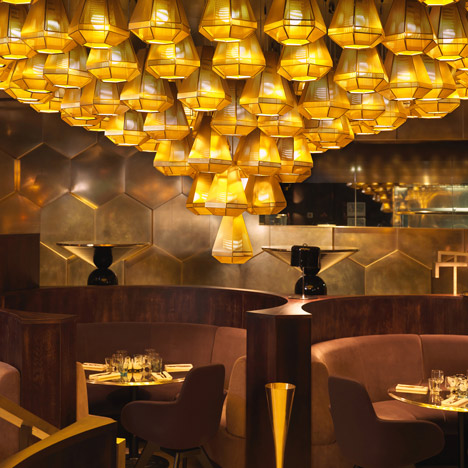 Originally intended as a luxury hotel, the building was designed in the 1970s by American architect Warren Platner and became offices for shipping company Sea Containers, from which it takes its name, before being bought by developers Archlane in 2011.

This maritime history was used as the starting point of the interiors concept for the hotel, which "embodies the elegance of a transatlantic 1920s liner" according to the designers.

A giant copper-clad wall shaped like a ship's hull curves into the lobby from outside, with a reception desk set into the form.

The rectangular sections of copper are riveted together to create a patchwork across the surface, which is edged with cove lighting above and below.

Also located on the 1,500-square-metre ground floor are a riverside restaurant and a breakfast bar.

A 61-seat screening room for TV and film premiers is decorated with blue walls, carpets and chair upholstery, contrasted with brass handrails and step edging.

"The hotel's 359 bedrooms will be furnished with custom designed furniture from Design Research Studio featuring rich colour palettes contrasted against standout metallic pieces following the nautical theme," said a statement from the studio.

Users of the Agua spa move through a submarine-like space, which changes gradually from white to black, to a hidden water feature.

Brass elements run throughout the building, edging door frames as they continue to the top of the building, where a bar on the roof is designed to look like the top deck of a cruise liner.

The terrace is surrounded by glass balustrades so the views of London to the north and south are unobstructed.