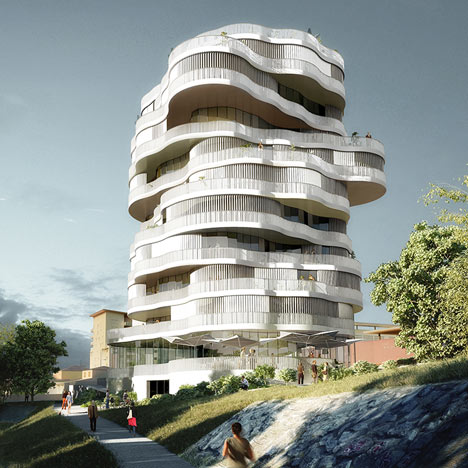 Visitors enter through a front door cast in concrete, intended to echo the proportions of the existing first floor windows on the building.

This slides open to reveal the ground floor space, which is fitted with bespoke pieces of furniture, concrete floors and a ceiling covered with mirrored stainless steel – a material Moussavi has used extensively on previously projects including the angular Museum of Contemporary Art Cleveland in Ohio.

Glass vitrines surround the four load-bearing columns that are found on this level, and are used for displaying the designer's sunglasses range.

A four-metre-wide flight of polished concrete stairs is located at the back, leading up to a flat white wall at the rear of the top floor that is used to project images of Beckham's collections. A similar flight leads down to the basement level.

Diagonal sections of the floor and ceiling have been cut away with the intention of creating a visual connection between all three levels of the 560-square-metre space. These triangular holes accommodate the staircases, while clear glass balustrades are designed to maintain a sense of openness.

Moussavi, who was previously a co-founder of Foreign Office Architects before setting up her own firm in 2011, has created a latticed ceiling from cast concrete on the first floor, with spotlights hidden in the diamond-shaped gaps.

Lengths of blonde-gold coloured chain are used to display clothes throughout the store. These are suspended from recessed tracks in the ceiling and can be moved to make way for installations and other displays. Further hanging space is proved by zig-zagging strips of metal in the same colour, suspended on wires.

Shelving has been designed to be "wafer thin" and can retract into the walls.

"When you come into the store, it's a real gem with a very special energy about it. We didn't realise how big it was until we knocked the walls down," said Victoria Beckham.

"Farshid Moussavi has an incredible eye, she's a very strong woman, she understands fashion, she'd never worked in retail before and I was really attracted to that. A lot of time and effort has been put in to things that look really quite minimal."

American walnut wood and bottle-green coloured glass have been used to create the fitting rooms and cash desk. The same wood is used to create bespoke modular benches that sit on the tips of triangular shaped bottoms.

Stainless steel has been used to wrap display counters, with built-in glass display cases, as well as columns and the ceiling of the lower-ground floor.

The shop, which opens this week, is intended as the first in a series of Victoria Beckham stores.