The Netherlands' first covered market is located in Rotterdam's city centre and has space for 96 fresh produce stalls and 20 hospitality and retail units on the lower two floors.

MVRDV's design for the building comprises an 40-metre arched roof that contains 228 apartments, covering the public space based on food markets in Stockholm, Barcelona and Valencia.

A colourful one-hectare mural by artists Arno Coenen and Iris Roskam covers the inside of the arch, printed onto perforated aluminium panels then attached to acoustic panels for noise control.

"Cornucopia shows oversized images of market produce which can be bought at the market, while the flowers and insects refer to the work of Dutch still life masters from the 17th century," said MVRDV.

Giant glazed walls at each end protect the market from the cold and wet weather, constructed using pre-stressed steel cables that create a suspended net in-between which the glass panes are hung. 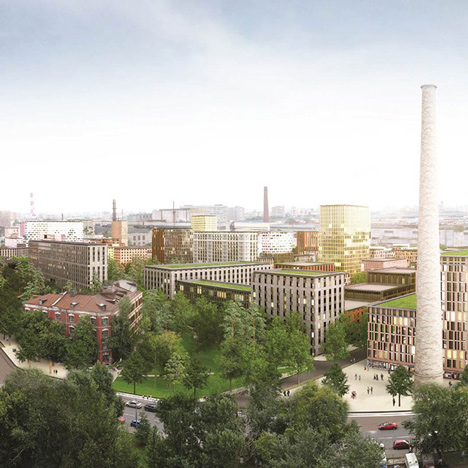 Square windows puncture the flat grey end walls and the curved internal arch, allowing residents to look down onto the market.

Balconies for the apartments run along the sides of the building, with views either towards the historic Laurens Church or the River Maas.

The apartments and duplexes – from two to five bedrooms and a mixture of rental and freehold – occupy the upper nine storeys, while the lower two floors are taken up by retail units.

The shops all sell food-related produce and an underground supermarket is also included in the complex.

A staircase in the centre of the market, named The Time Stairs, showcases a permanent exhibition about the history of food and artefacts found during the excavation of the site.

The project, by developer Provast, forms part of the city council's to redevelop the Laurenskwartier district where it's located. It was opened by Queen Máxima of the Netherlands during a ceremony earlier today.

The City of Rotterdam first launched the competition to design a combined market hall and residential building in 2004, which was won with the design by MVRDV in collaboration with INBO architects, Royal HaskoningDHV, Peutz and Techniplan.

For job opportunities at MVRDV, visit their company profile on Dezeen Jobs.