Madsen, who is design manager at Danish practice Aarhus Arkitekterne, which designs all of Vola's new products, says the trend for open-plan living spaces has increased the significance of the bathroom as a private space.

"Today, the interior of the house is very open, so the bathroom has become a very important room where we can retire, where we can lock the door and be ourselves," he says. "We see a lot of products with LED lights and touch screens and I think they are very distracting."

Vola produce a number of products that incorporate motion sensors, including a hands-free bathroom tap and soap dispenser. But Madsen says the key is to incorporate the technology subtly, so you don't know it is there until you use it.

This approach to bathroom design goes back to the first Vola tap mixer, designed in 1968 by founder Verner Overgaard and architect Arne Jacobsen. 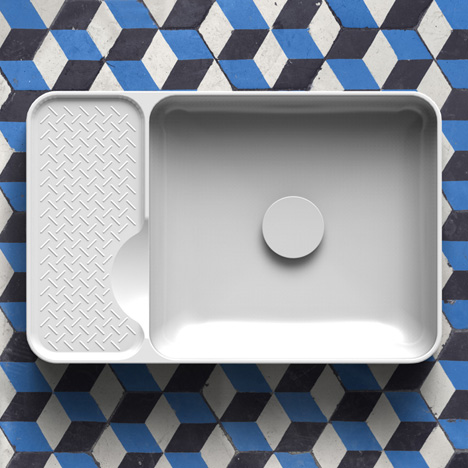 Bathrooms aren't getting bigger; good design is about "optimising the space"

"It all started back in the 60s," Madsen says. "The main point for them was to hide away all the things into the wall that aren't important to you as a user."

Madsen has taken the same approach with his own products for Vola, which include a heated towel rack consisting of a series of steel bars that protrude out from the wall.

"It obtains all the things that Vola stands for," he says. "The product is very simple, it's an extruded aluminium bar that is put into the wall only leaving the bars visible. It's very Vola."

Another product Madsen designed for the brand is a round, wall-mounted shower head made from a solid piece of steel.

"It is not a moulded part, it is not a welded part," he explains "It is made out of a massive cylinder, where you cut slices just like a salami."

The steel is brushed in a circular motion to emphasise the shape of the shower head.

"One of the most important steps is the brushing of the product," Madsen says of the shower head, which is hand-brushed at Vola's factory in Horsens, Denmark. "Here I see where design and handcraft goes hand-in-hand."

He adds: "For me it's very important that it is not only designed in Denmark, it's also produced in Denmark. Which is very rare for these kinds of products. Here they are producing all the things that we have been designing and that makes me happy."

This movie was produced by Dezeen for Vola. The music featured is by Jo Noon. You can listen to the full track here.