The Dezeen and MINI Frontiers exhibition presented work by six cutting-edge young creatives exploring how design and technology could transform the way we travel.

From ubiquitous augmented reality to long-haul space travel, the exhibition featured a series of radical concepts for how we might get around in years to come.

"The reaction has been really extraordinary," Fairs says in the movie. "All of these exhibits look really good: they're well designed, they're beautiful. But they also all contain really provocative and intelligent ideas. They're not just superficial objects."

One of the most talked-about pieces on show was a stained-glass driverless car by Dominic Wilcox.

"Driverless cars are going to become super safe," Wilcox explains. "So it's going to free up designers to be more creative. I've pushed that idea to the limit."

You can see how Wilcox made the car in the movie above, as well as behind-the-scenes looks at each project commissioned for the exhibition in the videos throughout this post.

Alexandra Daisy Ginsberg presented an "ecosystem" of 113 model cars, demonstrating how, in a future where vehicles are made locally from sustainable biological materials, our design processes might start to follow evolutionary patterns.

"A car company would just make the chassis of a car and the shells would be be made locally in workshops and fabrication plants around the world," she explains. "You'd start to see people customising and adapting the size of the shells based on local driving conditions."

Artist Lucy McRae created a speculative vacuum chamber, inspired by research by NASA, designed to prepare the human body for the rigours of zero gravity during a long-distance journey in space. 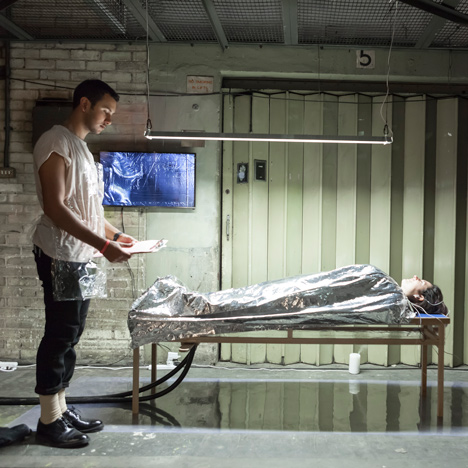 Matthew Plummer-Fernandez's project Unique Passengers is based on the idea that, as technology in our cars becomes more and more complex, we will need to create personalised avatars in order to communicate with them.

"Unique Passengers is a speculative service for driving companions that sit on your dashboard and assist you on your travels," he says. "If you follow the Twitter account, the service will generate a new avatar specifically for you."

Keiichi Matsuda presented an extract from his upcoming Hyper-Reality series of films, which explore a future of ubiquitous augmented reality.

"The film explores the augmented city from the perspective of a driver," he says. "By taking the signage into the digital layer, you can start to think about the city being able to dynamically direct flows of traffic. It means the city stops being a fixed entity and starts becoming a much more fluid, dynamic landscape."

Architect Pernilla Ohrstedt's Glitch Space installation, which consisted of over 100,000 white vinyl dots applied to the space, provided the backdrop for the exhibition. 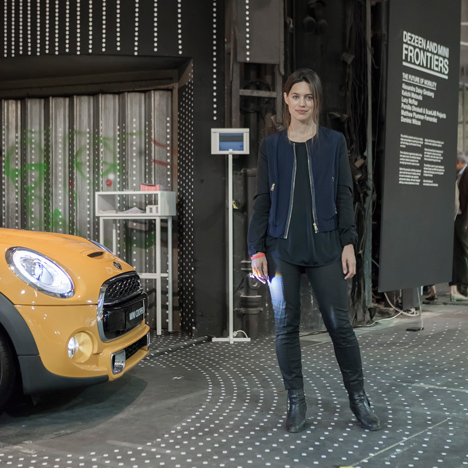 "These dots represent what driverless cars in the near future will see and capture in the blink of an eye," she explains. "They will constantly be scanning the space around them, capturing three-dimensional data in the form of a 'point could'. What we've done is recreate this point cloud on the walls and surface of designjunction."

The Dezeen and MINI Frontiers exhibition took place at designjunction during London Design Festival from 17 to 21 September 2014.

The music featured in the movie is a track called Contemphasic by Bankcee.