Vertical strips of masonry wrap around the buildings and playgrounds that make up Forfatterhuset Kindergarten, a new preschool in Copenhagen by Danish studio COBE (+ slideshow).

COBE designed the three-storey structure, which has capacity for 160 children, to function as a scaled-down village with buildings of varying heights and purposes set within a landscaped area. 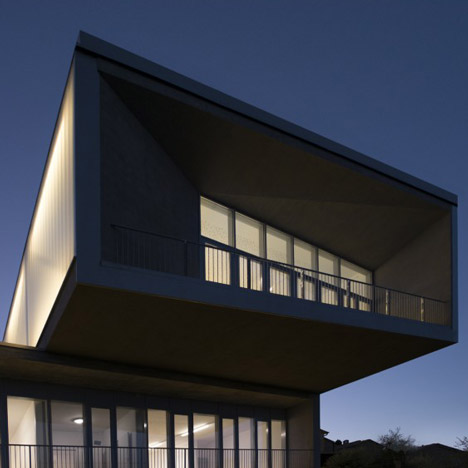 Sections of rust-coloured cladding unfurl from the rounded edges of the five interconnected buildings, encircling the large outdoor playground and matching the tones of nearby brick buildings.

"The idea of making five volumes, which are bound together by a red brick baguette facade, originated from the attempt to create spaces in various scales, according to the children's needs in the interior as well as the exterior," said project architect Greta Tiedje.

"From the outside the kindergarten appears as a village for children," added Dan Stubbergaard, founder of COBE.

The kindergarten is situated in an area of Copenhagen surrounded by red brick nursing homes and sheltered accommodation.

"From being a last destination for many people's long lives, the area is now also a place where children grow up and start their lives," said Stubbergaard.

The architects chose to face the nursery in lamellae – slim pieces of brick applied in vertical rather than horizontal strips. The colouring was intended to reference the red brickwork of the surroundings.

"It is a sensitive art adding new to old in a historic area," added Stubbergaard. "First of all we wanted to understand the area's characteristics and then we wanted to strengthen it but at the same time create something new and contrasting.

The kindergarten curves around a central courtyard, and at its highest point is three storeys tall.

On each floor, one of the five small buildings that makes up the structure leaves the floor plan, creating three rooftop terraces that connect to the structure at different levels.

The brick cladding extends upwards from the facade to enclose and screen the rooftop gardens.

The rusty coloured exterior, punctuated by deep red window frames, contrasts with the white interior of the nursery. The space centres around a triple-height atrium with a white metal-framed staircase rising up through its centre.

The landings that surround the staircase are used as an extension of play spaces and nurseries on each level.

A grille completely encloses the stairwell and landings that overlook an open plan play area on the ground floor.

In the play park, circular elements including a sandpit, slide platform and miniature ring road for toy cars, reflect the curving shape of the building and perimeter fencing.

Photography is by Rasmus Hjortshoj, apart from otherwise indicated.