Pneumatic arms lift the walls of Sean Godsell's MPavilion, the project billed as Australia's answer to the Serpentine Gallery Pavilion, which opened to the public today in Melbourne's Queen Victoria Gardens (+ slideshow).

Inspired by the temporary pavilions built in London's Kensington Gardens each year, the inaugural MPavilion is the first of four structures commissioned by businesswoman and philanthropist Naomi Milgrom, and is set to host a programme of talks, workshops and performances. 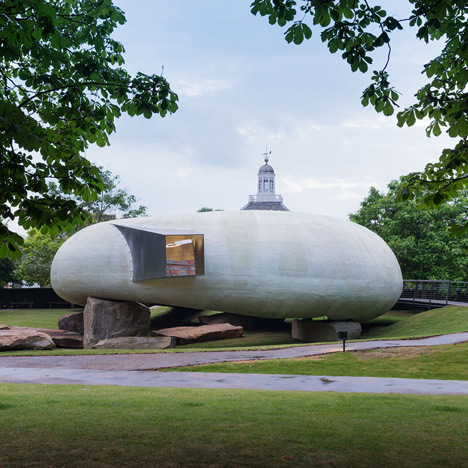 Australian architect Sean Godsell came up with a design he hopes is reminiscent of the hay sheds, barns and verandahs of the outback, which he describes as "Australia's meeting rooms".

Using galvanised steel, aluminium mesh and reclaimed wood, he developed a rectilinear pavilion with automated walls that fold up to open the interior out to the surrounding gardens, but that will automatically close in strong winds.

"The MPavilion is a simple steel structure with glazed roof and fully automated outer skin. It provides shade and shelter and filters the sun. Its precedent can be seen on distant hills and far horizons in the Australian outback," said Godsell, who also recently completed a design hub in the city.

"The design incorporates an innovative construction with wall and roof panels that open and close on pneumatic arms," he explained.

"This fully automated outer skin means that the pavilion will open each morning and close at the end of the day in a number of different configurations."

The 12-by-12-metre steel structure has a glazed roof to bring in natural light, but this is screened by the same perforated aluminium that clads the folding wall panels.

Godsell said this material choice will "animate the building" after dark. "Conceived as architecture that 'blooms like a flower' each day and opens to its audience, it also has a mysterious box-like quality at night," he added.

Reclaimed wood provides flooring, while gentle ramps lead down to the surrounding lawn. There are no pathways leading to the structure, although landscape designer Paul Bangay has added new perennial borders to the edges of the site.

"I have designed a series of contemporary flowering herbaceous borders, the largest in any of our public parks, using 3,000 flowering perennials that will flower throughout the summer whilst MPavilion is presented," explained Bangay.

The pavilion was unveiled yesterday by Milgrom, who said she hopes to have initiated "a truly inspirational design and architecture project for Melbourne with an enduring legacy".

The project was part-funded by the Serpentine Gallery. Co-director Julia Peyton Jones, who attended the opening, said: "I believe it will add enormously to Melbourne’s social and cultural life".

MPavilion will be open until 1 February 2015, before being gifted to the city of Melbourne and moved to a new location.

Photography is by Earl Carter.

Read on for a project description from Sean Godsell:

"The Australian landscape is a confusion of innate brutality and introduced refinement. Polite interventions early in our colonisation 'civilised' an otherwise harsh and often hostile environment where unfamiliar botanical species could poison and every bite and sting could kill. The indigenous landscape is ancient and its sunburnt beauty, once learnt, is never forgotten. Like the landscape itself it is scarred into the hearts and minds of Australians – it is part of us and we, of it. Any man made intervention in the outback symbolises shelter, respite, even salvation and the adaptive use of artifice underpins the tradition of building construction in this country.

"The introduced landscape design in cities like Melbourne provides contrast and relief, and in that relief exists another type of beauty – shade, autumnal colour, soothing lushness to offset the incessant dry. Order. Scale. Melbourne is a dense city that is counterbalanced by the vastness of its gardens. They nurture the city in an all enveloping green embrace and provide succour and comfort for all. In summertime our gardens are full of visitors who take advantage of the unencumbered accessibility that sets us apart – no fenced 'resident's only' gardens, no 'keep off the grass' signs. Tourists and locals alike take advantage of the ring of green formed by Flagstaff, Treasury, Fitzroy and the Royal Botanical Gardens along with The Domain and our site – Queen Victoria Garden, which is directly across St Kilda Rd from the National Gallery of Victoria and on a busy pedestrian route to the CBD, Federation Square, the cricket at the MCG, tennis at Melbourne Park and live performances at the Sir Sidney Myer Music Bowl.

"As a tribute to the then monarch and in the capital city of the state that bears her name, the Queen Victoria gardens are certainly an example of an introduced landscape. In the style of the English picturesque period of the late 18th century they adopt the symmetrical asymmetry of Lancelot 'Capability' Brown, combining plane tree lined avenues with artificially constructed 'hills and valleys' There is a water feature, a monument and discretely located folly – a bandstand – that is framed by a plane tree alley and located atop a 'hill' at the southernmost end of the garden. Contemporary sculpture The Pathfinder was added to gardens in the early 1970s. There is also a relatively level piece of lawn which directly opposes the NGV. With that axial connection and the city skyscrapers as a backdrop it is the obvious location for a temporary pavilion.

"The purpose of the pavilion is to make a place over the summer months for recitals, presentations, lectures, readings and performances in a well-designed and nurturing shelter. The hay sheds and barns, shearers' sheds and verandahs of the outback are Australia's meeting rooms and community centres. We congregate in these rudimentary structures and host weddings, balls, meetings about impending drought or inevitable fire. They are potent places. The Melbourne Pavilion is a simple 12-metre by 12-metre steel structure with glazed roof and fully automated outer skin. It provides shade and shelter and filters the harsh sun. Its precedent can be seen on distant hills and far horizons in the Australian outback."