Curves have been scooped out of the sides of this house for a pianist in Exeter, England, creating a rhythmic series of expanded and contracted spaces that frame the garden (+ slideshow).

Designed by Devon-based David Sheppard Architects, Chimes is the one-bedroom home of a woman whose main request was space for her two pianos. 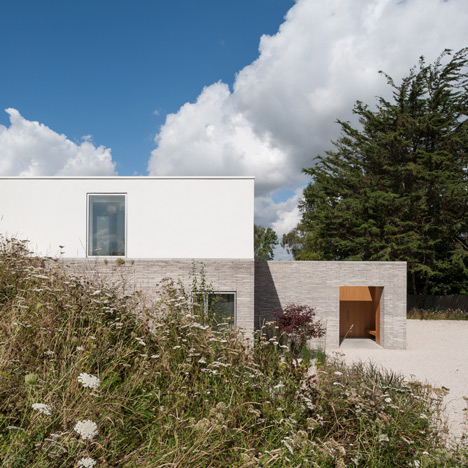 It replaces a lean-to building in the garden of her former home, which she sold to fund the construction of the new building.

"The owner is a superb pianist, and the principle objective was to have one space with room for two pianos, and a small house for minimal living," David Sheppard told Dezeen. "Within that brief, I had carte blanche to come up with this design."

The curves around the edge of the two-storey house are positioned to capture light from different angles, and create a mixture of wide and narrow spaces inside.

"When I first visited the site, the most dominant feature was a historic brick wall around the perimeter, which I didn’t want to touch, so I engaged with the design almost like a sculptor, carving the space out of a square block," Sheppard explained.

A brick fence was added to the front, which slides open mechanically to give access to off-street parking and a curved front door, while a small opening added to the front wall provides additional ventilation.

The expansion and contraction of spaces inside the home was partly inspired by eurythmy – an expressive movement technique developed by philosopher Rudolph Steiner that can be used to interpret space.

"Buildings are about moving through small, large, narrow or tall spaces, and as humans, we're more attuned to more organic forms. In nature, you rarely see straight lines," said Sheppard.

"This design is about movement, and experiencing space through light and form."

The ground floor has a large living room in the centre, and narrow passages on either side between the curves, leading to a bedroom at the back, and a kitchen and dining room at the front.

The top floor is devoted to space for the pianos, and opens on to a small terrace at the front of the house. The curves in this space also help to improve the acoustics.

Rooflights and narrow slot windows have been placed throughout the house to bring in light, maintain privacy, and offer glimpses of views outside.

In the entrance and living space, strips of glazing on a curved wall create a moiré effect, offering transparency when viewed from certain angles, and narrowing from others.

"The glazing opens up and closes as you move through the space," said Sheppard. "It also offers a view from the entrance to the courtyard outside, creating the sense of a larger space."

Beech plywood panels line the walls throughout the house and have been finished with limed wax, chosen for its cloudy white finish and ability to gently reflect light in the space.

"The chalky white colour has a reflective quality and enhances the grain of the beech plywood. It also has a cold, waxy feel that is beautiful to touch – almost like skin," said Sheppard.

A sedum layer was added to the roof to protect the membrane beneath from ultraviolet light, and photovoltaic panels were installed to provide the home with electricity.

The house was built on top of the previous building's concrete slab to minimise the amount of material that had to be removed to landfill.

Building on top of the existing slab also made it easier for the house to achieve a required 850-millimetre height above the ground, enforced to minimise flood risk.

The house does not to touch any walls surrounding the site, which meant that party wall agreements with neighbours were not necessary. Construction was completed in 15 months, and cost £284,000.

"I worked with a builder I knew, and one who really wanted to take on the project and had a very hands-on approach," said Sheppard.

"We did nearly 50 drawings for this project, so we gave them plenty of time to understand the building and every element of it."