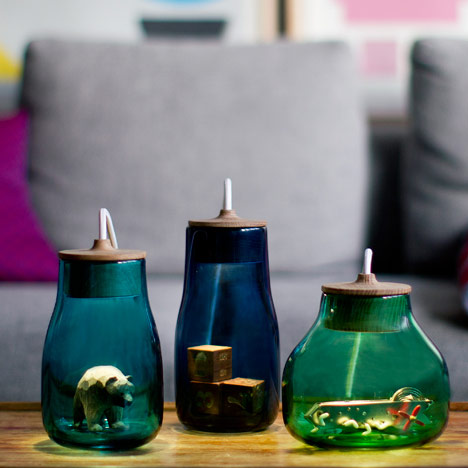 "The vases explore the tension and the relationship between the three-dimensional shapes and graphic surfaces of the objects," said Melvær.

The bottom-heavy Else vase features stripy patterns, created where triangular strips in a matte finish follow the form up from the base and meet the shiny neck.

The two different colour shades are subtly different; an effect created by using two layers of glass and sandblasting the lower sections to reveal the tone underneath.

"The vase explores the variation between the subtle differences in colour and the contrast between glossy and matte," said Melvær.

Marie has a curvaceous form that balloons out towards the top, opposite to the shape of the Else pieces, which changes in opacity as it differs in width.

The stem flows into doughnut-shaped sections at the top of the design, with a narrow hole for holding flowers in the centre.

"The narrow section of the vase is perceived as intense and opaque, while the curvy part is stretched and becomes more transparent," Melvær said.

Finally, the Gro vase is covered in coloured veins that look similar to leaf skeletons.

These are overlaid on the transparent external face of the vase, while the inside is coloured in a similar tone to the patterns.

"The object is made by use of the traditional graal technique," explained Melvær. "The glass is blown into a capsule shape, and then masked and sandblasted to reveal a vein pattern. It is later reheated and blown into the final shape."

The collection was displayed for the first time at the Verdi exhibition at Norway Designs in Oslo last month.

Photography is by Erik Five Gunnerud.