This cabin made from scaffolding is one of 22 temporary hotel rooms that popped up around Mannheim, Germany, as part of the Hotel Shabby Shabby event for the city's Theater der Welt festival (+ slideshow). 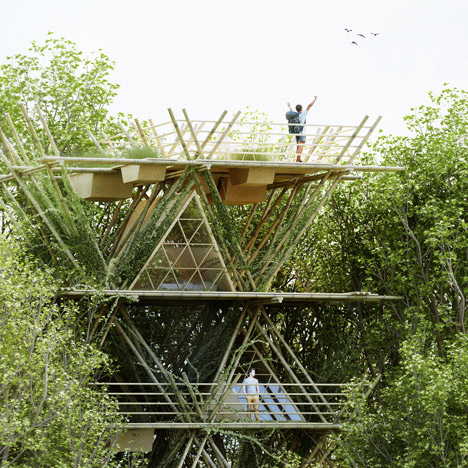 Penda's modular bamboo hotel could be expanded horizontally and vertically

In the event, selected entrants from around the world were asked to build temporary cabins in unexpected locations around the city using found or recyclable materials and a strict €250 budget.

The Hedonist was conceived as a miniature ad-hoc homage to the architecture of Mies van der Rohe overlooking the River Neckar, built with timber pallets, wood beams, corrugated fibreglass and steel scaffolding.

"In the transparent cube, you sit at the tributary of the River Neckar where it flows into the Rhine with a view on to the BASF factory," said the event organisers. "At night, the curtains can be drawn. But they are almost superfluous, as out there at the river's tributary, you are in the most undisturbed place you can possibly be in this city."

At night, eight torches suspended from the ceiling transformed the room into a glowing red box.

Explaining the concept behind the room and its name, architect Nuno Pimenta said: "The room adapts itself to the user, his interpretation of happiness or simply to a transitory state of mind, whether it means waking up with a beautiful 360-degree view of a natural landscape or having a hot one night stand."

"It reflects the good or the evil, the white or red, the opacity or the transparency, the shyness or the exhibitionism. It is a room where you can bring all of this inside or proudly show it to the outside," he added.

Other rooms in the project, which was curated by Berlin-based architecture collective Raumlaborberlin, included Collini Bay Resort, which featured a series of beach huts with beds overlooking the city's harbour.

The 3 Lichter Hotel featured a house-shaped room raised on scaffolding to embrace one of the three-pronged street lights along the Neckar River promenade.

Also raised on scaffolding, Monumotel allowed guests to rest beside a statue of German writer and philosopher Friedrich Schiller, inviting them to hang their belongings on his outstretched hands.

Fairy Tank offered guests a bed, cupboard and mini pool raised around one of the city's fountains, while Prinz Käse provided a cocoon-shaped spot in the city centre with a mattress surrounded by coils of yellow plastic drainpipes.

The spikey form of Feuer and Flamme was inspired by flames and built on a rooftop using old poles, wooden boards and other found materials.

The 22 temporary hotel rooms were built at the city's National Theatre and moved to their locations. They were available for bookings during the 17 days of the festival, which took place across May and June.

Other venues for the temporary hotel rooms across the city included the former army barracks, a car parked near the National Theatre, and a cabin suspended from a tree in Mannheim's Luisenpark.

Photography of The Hedonist is courtesy of Nuno Pimenta, Frederico Tavares de Pinho and Miguel C. Tavares. All other photography is by Arthur Bauer.