The exposed criss-crossing skeleton of this see-through house in Japan frames a labyrinth of wall-less rooms connected by over a dozen different staircases (+ slideshow).

Designed by Tokyo-based architect Yuusuke Karasawa, S House is a two-storey-high building broken up into five split levels, creating a series of evenly sized rooms that are connected by staircases rather than corridors. 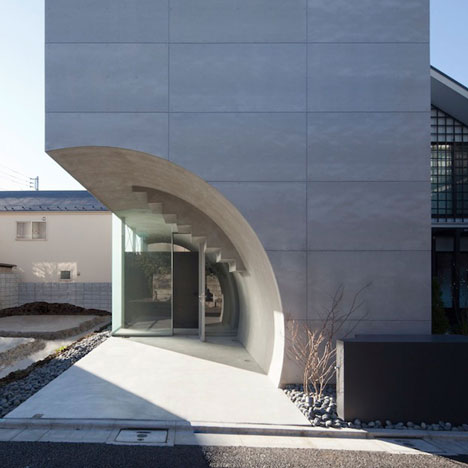 The plan of the building is a rectangular grid divided up into quarters that alternate between solid and void. This means that some floors contain two rooms that don't meet one another – joined only by the spaces above and below.

The convoluted structure is a response to the increasingly complex nature of information networks like the internet, according to Karasawa, whose previous buildings include a house where angular cutaways create apertures through walls, floors and ceilings.

"Our hope is that this complex, layered network space will become a new architectural form that captures the various activities borne out of today's informational society, where diversity and order are being demanded at the same time," said the architect.

S House is located close to the train station in Satiama, a city on the outskirts of the Japanese capital. All four of its facades are glazed, so neighbours can see right through the building.

The staggered floor plates protrude beyond the glass walls, connected by diagonal supports that relate to the positions of the various staircases inside the house.

Some of these staircases appear to have been carved out of the volume, while others look like they have been fixed onto the various surfaces. As there are barely any internal walls, several are often visible at once.

"The complicated structural logic is applied not just in the elevation but throughout the interior space as well, where the floors themselves entwine diagonally, with a void that looks out to the opposing space created at the centre of this complicated floor," said Karasawa.

"Although this opposing space seen from the void appears to continue visually, one can only arrive at it by traveling through the complicated levels, and taking a drastic detour after moving to a different floor," he said.

A solid white door leads from the main entrance, leading through to a reception room on the ground floor. A dining room is also located on this level, but residents have to go up through either the mezzanine kitchen or living room to access it.

A master bedroom, bathroom and storage area occupy the lowest floor of the house, which is sunken below ground level by almost two metres.

A guest bedroom and study can be found on opposite corners of the penultimate floor, while the uppermost level boasts a pair of secluded roof terraces.

Karasawa used a steel frame to create the complex structure, which has a 50-square-metre footprint. Internal fittings were kept to a minimum, although oak flooring and hemp carpet were added to some rooms and white worktops were installed in the kitchen.