Work is nearing completion on the Amphibious House by Baca Architects – a family home on an island in the middle of the River Thames that can float on rising floodwater like a ship in its dock.

The house by London studio Baca Architects was designed for a couple who had been looking for a site to build a home on the flood-prone river island near Marlow in Buckinghamshire for seven years. 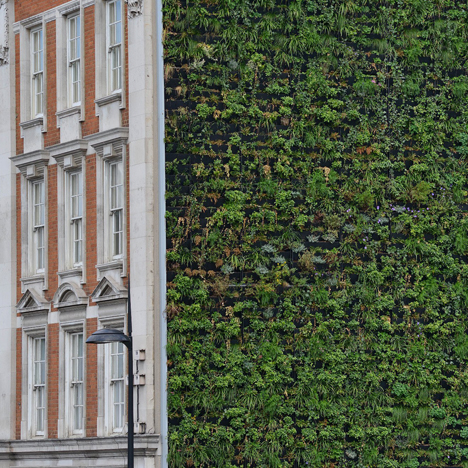 "During the flood event the whole house will raise gently like a boat and will keep all of the habitable spaces safe above the flood level," Baca co-founder Richard Coutts told Dezeen.

The couple chose Baca on the strength of research work on waterways that the firm has been carrying out with the UK's Department for Environment, Food & Rural Affairs called The LifE (Long-term Initiatives for Flood-risk Environments) Project.

"Rather than building flood defences, [The LifE Project] considers a different approach, to acknowledge man cannot beat nature and to actually make space for water," said Coutts. "Our work, until recently, was better known in Holland than here in the UK."

Baca considered a number of different approaches to dealing with the unpredictable water levels on the site, including a fully floating structure  – an option ruled out by officials from the government's Environment Agency – and raising the house on stilts.

"If we'd have gone for an elevated house the ground floor would have been so high, almost two metres off the ground, the house would have looked out of keeping with its neighbours," explained Coutts. "The benefit of an 'amphibious house' is that it looks in all intents and purposes like a normal house. Rather than having a house that's up in the air you get proper engagement with the garden."

The lightweight timber-framed structure is fairly traditional in its form, but sits inside an excavated "wet dock" made from steel sheet piling with a mesh base to allow water to enter and escape naturally. Clad in zinc shingles with glazed gables, this structure is independent of the house, which has a foundation of waterproofed concrete that wraps around the lower ground floor, acting like the hull of a ship.

The design was developed according to the Archimedes principle: "the house's mass and volume are less than the equivalent of water, and that's what creates buoyancy," explained Coutts.

Four posts, nicknamed "dolphins" by the project's engineer, act as vertical guideposts to allow it to slide up and down when it needs to move. These could be extended in future to cope with rising water levels.

"In the same way you have Liverpool Docks or the Royal Docks, which were man-made enclosures for building ships, this is a lot smaller scale and in this circumstance its built inland and will contain the house," said Coutts. "When a flood event occurs, the river will rise gently and within the base of the wet dock the water will then start to rise."

On the riverside, the garden is terraced to act as an "early warning system" for rising waters – when the first two terraces fill with water the house should begin to rise.

"At the front of our site we've designed something which is called an intuitive landscape. It's a visual early warning system to the client to say 'look your first two terraces are inundated with water' and it's an intuitive way to say change is happening within the river, the first two flood cells are filled, your house should have started moving."

The house is currently designed to travel up to two and a half metres, based on worst-case scenario flood predications from the Environmental Agency and some additional tolerance for climate change.

Services are connected through "elephant cabling" – a flexible cable that carries electricity water and sewage. For safety reasons, the house only uses electric power and no gas.

The island has no road access, so the architects used reclaimed NATO military equipment to build a floating pontoon that was used as a "chain ferry" to carry materials to the site. The size of the pieces of steel and glazing used in the construction of the house also had to be restricted due to the lack of mechanical lifting equipment.

"Prior to this project there had never been an amphibious house that had secured planning in England," said Coutts. "It wasn't covered by building regulations and is also located in a conservation area so during the course of the project we have had to go through numerous negotiations with all the various statutory bodies to set a responsible president for other houses that may well follow."

Planning restrictions meant the house had to recreate the footprint of the previous structure that occupied the site, so the architects designed the structure with a habitable basement level to accommodate extra living space and a cinema room.

The structure is accessed via a flight of six steps that lead up to the raised ground floor, which contains an open-plan living and dining room as well as two bedrooms.

A mezzanine floor contains the master bedroom, with an en-suite bathroom and steam room.

A flood on site delayed construction, which was due to finish in time for the broadcast of the project on UK home building TV show Grand Designs tonight but will now complete next month.