Aberrant Architecture renovated the interior of this small private school in London with brightly coloured walls and furniture that pays homage to the building's Edwardian roots (+ slideshow). 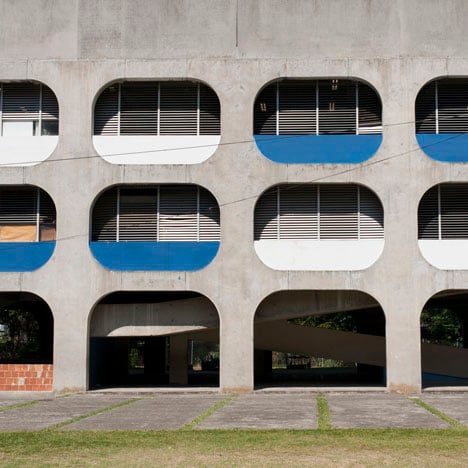 The south-London studio took the school's Edwardian construction and waterside location as points of reference for the design which includes brightly painted period features and a fleet of wooden canal barges.

"During the design process we stripped back the layers of paint, plaster, wallpaper and ad-hoc building work that had accumulated over the years to reveal an original layering of forgotten materials and features," studio co-founder David Chambers told Dezeen.

The architects restored the original parquet flooring and entrance steps, while pipework and radiators were reconditioned and coated in brightly coloured paint, to highlight them as a feature of the building's heritage.

"What most attracted us about the late Edwardian design language of the original school building was the way in which they borrowed from the past," said the architect, whose studio's previous projects include a mobile performance venue and a market stall.

"It was not in a revivalist way like the Victorians, who tended to copy earlier styles wholesale. It was more about only borrowing features that were appropriate for present day needs," he explained.

Each area of the school has been painted a range of intentionally clashing colours. One classroom has bright yellow walls, floors and furniture, with wooden storage walls and sky-blue radiators.

In one toilet block, cistern pipes above the toilets have been painted bright blue to contrast with the lime green walls, while purple shaded lights hang over the stalls.

This scheme continues into the main play area for the school, which has blue columns and green flooring.

Dimmer areas of the building, including hallways, are painted a dark leafy-green.

The architects say they took inspiration from Edwardian colour theory for the colour scheme.

"Borrowing this idea ourselves we experimented with over 220 different colour samples and combinations before arriving at the final colour scheme."

Walls have been split into three sections with different functions. The lower areas of the walls are aimed at children and include storage, seating and chalk boards, whiteboards and projection screens for teachers in the middle area, while children's work can be displayed on the uppermost section of the wall to create a contemporary frieze.

"The late Edwardian interior treatment of the original building divided the walls into different sections for both practical and decorative reasons and comprised the dado rail, picture rail, the frieze and the spaces in-between which were either painted or panelled," Chambers told Dezeen.

During a workshop to find out the needs and desires of the different users, the architects received a number of suggestions for additions to the building – including the wooden canal boat playrooms, which reference the nearby Regent's Canal.

"During the workshops we asked the participants to become architects for the day and draw the aspects of the school that should be celebrated, identify areas for improvement and think about what needed to be added," added Chambers.