News: work has begun on a Greek Orthodox Church designed by Spanish architect Santiago Calatrava to replace a building that was destroyed by the collapse of New York's World Trade Center buildings on 9/11.

Santiago Calatrava has designed the Saint Nicholas National Shrine building for the Greek Orthodox Church, which will occupy a site at 130 Liberty Street on the edge of the National September 11 Memorial park. 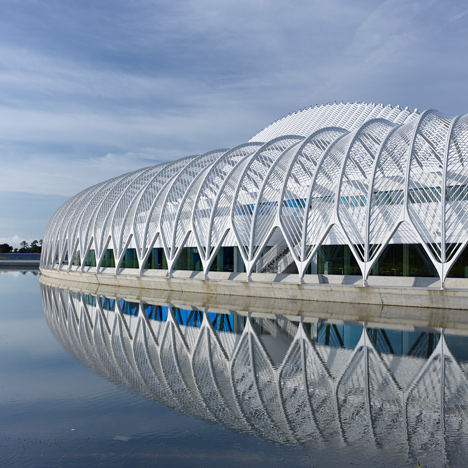 Influenced by two existing places of worship in Istanbul – the Hagia Sofia and the Church of the Holy Saviour in Chora – Calatrava's scheme was selected from over a dozen proposals to replace a 19th century building that was destroyed by falling debris and building parts from World Trade Center Tower Two during the 9/11 attacks in 2001.

The site of the church has been moved to accommodate the new World Trade Center masterplan, and the new building will sit opposite the pavilion of the 9/11 museum by Norwegian architecture firm Snøhetta.

"A former small tavern, the Church was always an interesting counterpoint to the skyscrapers that grew up around it," said Calatrava in an open letter to the Greek Orthodox community after winning the commission.

"Like its forebear, the new Church is to be a tiny jewel in Lower Manhattan," he said.

Built largely from white Vermont marble, the central dome-shaped structure and a portion of the rest of the building will be clad in a translucent skin that will make the building "illuminate from the inside" at night.

"The new Church is principally based around a central Cupola," explained Calatrava. "This is purposefully different for the rectilinear lines of the former Church. Indeed, it harkens back to both the Greek classical architecture of the Acropolis and the Byzantine architecture of the Hagia Sophia."

A public "Ground Blessing" ceremony earlier this month marked the beginning of construction on the project.

During the ceremony, Calatrava compared the reconstruction of the church to "the rebuilding of the Parthenon in Athens by the ancient Greeks," according to a statement released by his studio.

The Greek Orthodox Church is currently seeking donations towards the $20 million cost of the project.