Dezeen and MINI Frontiers: playfulness is essential to creativity claims London designer Dominic Wilcox, who says that creatives should not "worry about what other people think" (+ movie).

"I believe that playfulness in design – particularly at the beginning, at the ideas stage – is really important," says Wilcox, whose latest surreal invention is a car made from stained glass commissioned by Dezeen and MINI.

"I'm deadly serious about being playful. It's really important."

Playfulness is the "essential base of creativity," he claims.

"When your mind is loose and thinking potentially crazy thoughts, other ideas click off that and other people get inspiration from that," he says. "I think it's very important to start off being playful, to not worry about what other people think."

Wilcox is well-known for his surreal sketches and absurd inventions, many of which are collected in his book Variations on Normal. 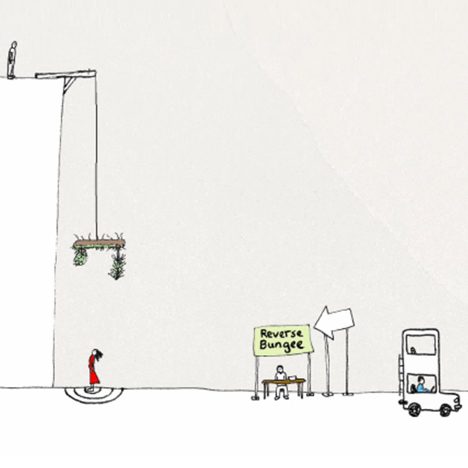 Variations on Normal by Dominic Wilcox

He realised some of them for a window display at Selfridges earlier this year, including a tea cup with a cooling fan (above).

For the Dezeen and MINI Frontiers exhibition Wilcox built a full-scale concept car made from stained glass, designed for a future where driverless technologies have made the safety features on today's cars redundant.