Istanbul Design Biennial 2014: these objects designed by Austrian studio Mischer'Traxler are equipped with both the tools and instructions required for reproducing them (+ slideshow).

Katherina Mischer and Thomas Traxler are presenting a blanket and a sketchbook at the Istanbul Design Biennial 2014, forming the start of a collection entitled Knowledge-Tools-Memory. Both items double as tool kits with illustrated instruction manuals. 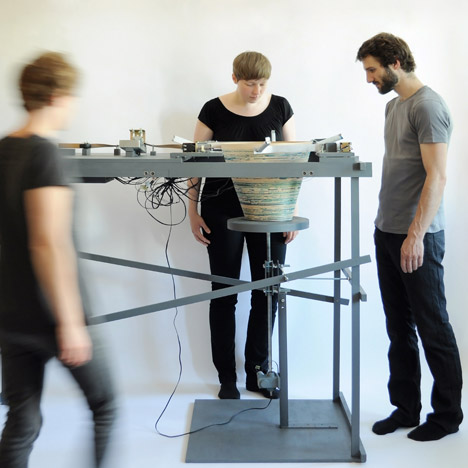 In societies where few people know how everyday objects are produced, the designers wanted to question whether the perceived value of an object changes if the owner understands the processes involved in its manufacture.

"Objects in our everyday lives may exist to perform a certain task, but they also communicate aspects of their history, their past, where or when they were made," said Mischer, whose past projects with Traxler vary from a basket-building machine to bowls cast from vegetables.

"If knowledge of how to produce objects fades, how does this change our relationship to them?" she asked.

The blanket is made from wool and is large enough to comfortably cover a person. Its surface is printed with 15 stylised diagrams that illustrate each stage of the textile's production, including sheep shearing, twisting fibres into wool, and the weaving process.

An extra strip along the bottom incorporates a row of pockets each assigned to a different tool, from a comb used to groom sheep to scissors.

Similarly, the sketchbook shows the process of transforming grass fibres into liquid pulp that can be strained and sieved to make paper. It features a sewn and laser-engraved cover.

Neither item has any extra decoration – so the illustrated instructions, drawn by graphic designer Brigitte Höfler, provide the only adornment.

"The decoration is the instruction and becomes therefore functional," said Mischer. "The project should encourage a rethink of individual abilities and also show the ability of everyone to be able to produce basic things."

Mischer'Traxler, who often address the production process in projects, first showed the blanket in 2013 at an exhibition named Another Terra. The sketchbook is the second object in the series and is presented for the first time in Istanbul.

The designers plan to add more objects in the future.