The Equilumen lamp by Viennese design duo Mischer'Traxler features two oversized globes seesawing on either side of a horizontal rod (+ slideshow).

Equilumen's light distribution shifts along with the motion of these glass spheres, which are each held in place by a metal loop.

As the rod tilts, power to the lights is reduced or increased, and the spheres dim or brighten according to their relative position.

When a sphere is at the lowest point below the equilibrium position, it will be at its brightest, while at the highest point, it extinguishes.

When the spheres are in balance, so too is the intensity of their light. The same amount of light is always distributed between two sources.

Although users are able to set the lights into a position they favour, Equilumen can also be left to drift by itself, creating a more unpredictable, shifting light installation.

Mischer'Traxler describe the light as "a game of 'give and take', symbolising that the right balance is a delicate, inconstant position and always a matter of the ideal distribution between participating parties".

The designers previously experimented with balance in an exhibition of precariously arranged scales that showcased work created by them. 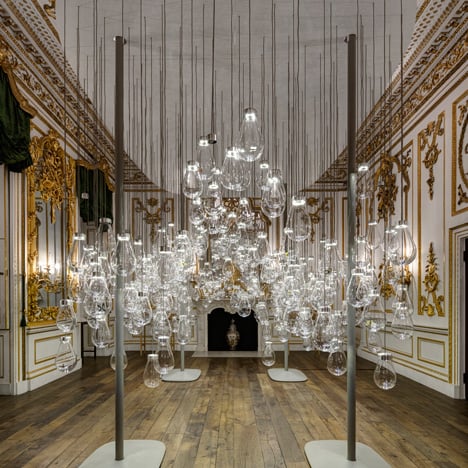 The duo also incorporated movement into their Curiosity Cloud installation at the V&A in London, which was composed of dozens of glass bubbles inhabited by fluttering handmade insects.

The Equilumen installation was first designed for an exhibition themed around the topic of freedom, and was shown at Designblok in Prague, which took placed from 22 to 27 October 2015. The lamp was also shown during Milan design week 2016.

Other designers to have incorporated pivoting mechanisms into their lighting include Berlin studio Yuue Design, which created a steel and marble lamp that's adjusted by a sliding handle.

Norwegian studio Kneip, meanwhile, created a balancing floor lamp that can be swivelled from side to side to change light levels.