One World Trade Center, which had its official opening yesterday, is built on the site of the Twin Towers destroyed in the terrorist attacks of 9/11.

Skidmore, Owings & Merrill (SOM)'s 104-storey building for the site in Lower Manhattan stands at over 540 metres, making it the tallest in the western hemisphere. It replaces a quarter of the office space lost in the attacks. 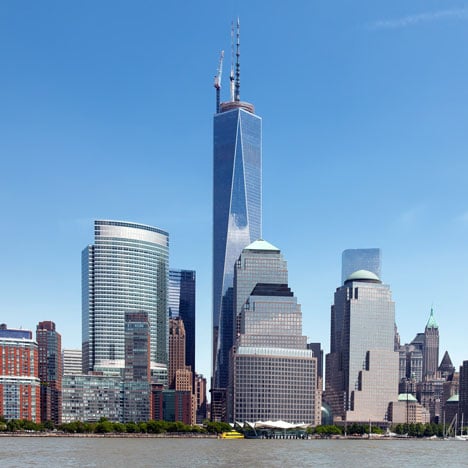 "The completion of One World Trade Center marks a major milestone in the history of New York City," said a statement from SOM.

The centre, which took over eight years to build, occupies the site adjacent to the 9/11 Memorial and the museum designed by architects Snøhetta, which completed in May.

"While the memorial, carved out of the earth, speaks of the past and of remembrance, One World Trade Center speaks about the future," said the architects.

"[It] recaptures the New York skyline, reasserts downtown Manhattan's preeminence as a business centre, and establishes a new civic icon for the country."

Employees of publisher Condé Nast were among the first residents to take up desk space in the building at its opening.

The glass office tower has a "crystalline" form that rises from a square base. Above this, the edges of an oblong glass box appear to have been sliced away, transforming the cube into a multi-faceted structure and giving central levels an octagonal floor plan.

The centre is topped by glass parapet for an observation deck measuring 46 metres by 46 metres and a spire that juts high above the skyline.

"As the sun moves through the sky or we move around the tower, the surfaces appear like a kaleidoscope, and will change throughout the day as light and weather conditions change," they said.

The tapering triangular form is intended to resonate with neighbouring iconic structures the Chrysler Building and Empire State Building.

A ceremony to mark the official opening of One World Trade Center will be held later this month.

The building joins a tower designed by architect Fumihiko Maki, which completed last year, on the site where a transportation hub by Santiago Calatrava is set to finish next year and another skyscraper by architect Richard Rogers is due to open in 2017.

Last week it was announced that Calatrava has also begun work on a Greek Orthodox Church to replace a building that was destroyed by the collapse of the Twin Towers.