Movie: in the first of a series of exclusive video interviews filmed for Moroso, Ron Arad tells the story behind his first collection for the Italian brand, which he says helped it become "one of the leading firms in contemporary furniture."

Arad's 1991 Spring collection for Moroso consists of a variety of different chairs, including an upholstered version of his Big Easy armchair, which was originally hand-crafted out of stainless steel.

"It was very successful and I think it turned my career," says Arad in the movie, which was filmed at the brand's Moroso Loves London exhibition during this year's London Design Festival.

"I also want to believe that it turned the direction of Moroso. I don't need to tell you that Moroso became one of the leading firms in contemporary furniture."

The company's creative director Patrizia Moroso approached Arad after seeing his work in Milan. Initially she only wanted to reproduce the Big Easy armchair, but Arad convinced her to do a collection together. 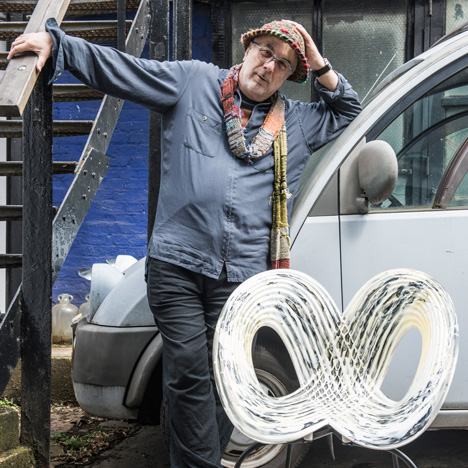 "It was Ron Arad's first experience of industrial design"

"A long time ago I used to bring stuff that I made in London to Milan," he explains. "Patrizia turned up and said: 'Wow, that's nice, can we make it in Moroso?'"

Arad says the success of the collection was down to Patrizia's determination, despite reservations from other members of her family.

"I remember the sideways looks I got," he explains. "Who is this guy? What is he doing here?"

"She was very brave. She was fresh from the University of Bologna and she knew what she was doing. Against all the heckling we managed to do this collection."

Dezeen Book of Interviews: Ron Arad features in our new book, which is on sale now

"I'm very amused by this, because I thought we'd completed all the cycles," Arad says. "Me doing something in metal to look like upholstery, blah blah blah."

"Here I come and from a distance I said: 'What's that metal chair doing there?' But it's not metal, it's plastic."

Other products by Arad for Moroso include a 2007 modular seating system called Misfits. Arad claims the undulating form of the piece resulted from carving foam by hand.

"[Patrizia's] uncle was a master, like Michelangelo, with a carving knife," he says. "We used a knife that's used to cut meat and we cut the foam with it. I marked it and he cut it and we did Misfits."

In 2013 Arad created a stool for Moroso that rests on sprung steel loops for legs, based on the Two Nuns Bike he designed, which uses the same steel loops instead of spokes.

"After the bike I thought it would be nice to do a stool that is only suspension," Arad explains. "It has no structure to it. There is something very pleasing about doing a stool that moves up and down and sideways and it doesn't have a structure."

This movie was filmed at the Moroso Loves London exhibition at Moroso's London showroom at 7-15 Rosebery Avenue.

We'll be publishing more video interviews with designers featured in the exhibition over the coming days.

Watch all the movies »