Earlier today, the Cities Unlocked research project – set up by Future Cities Catapult, Microsoft and the Guide Dogs charity – released details about a smart headset that provides the wearer with information about their surrounding environment when paired with a smartphone. 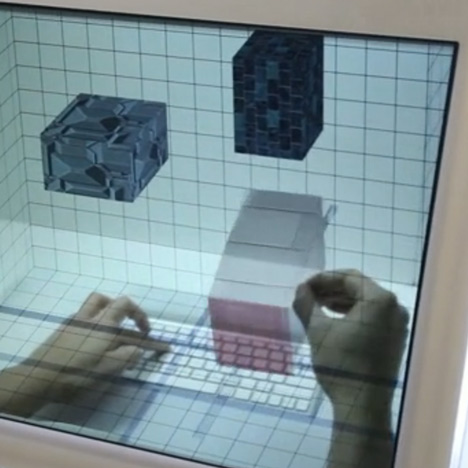 Using audio technology developed by Microsoft, orientation, navigation and contextual information is delivered through vibrations in the headset that transmit sound through the wearer's jaw and cheek bones to the inner ear, bypassing the ear drum.

This, combined with bone's ability to conduct lower frequency sounds more efficiently than air, allows the wearer to still hear the noises around them as usual, but also be aware of another layer of voices and alerts from the device.

Developed with sports headphones company AfterShokz, the headset features nodes that sit in front of each ear, connected by a band that wraps around the back of the head. These emit the vibrations necessary for the headset to transmit sound through bone.

Scanning the wearer's head using a Microsoft Kinect camera allows the headset to be customised to the position of the individual's ear canals, helping it to create noises that trick the brain into thinking they come from certain directions creating a "3D soundscape". If a wearer is facing the wrong way, a sound that seems to come from behind them can help them change direction.

The locations of coffee shops, ticket gates and points of interest, as well as directions, can be spoken to the wearer by the device to help them better understand where they are.

"Cities Unlocked aims to understand and solve some of the mobility problems of the visually impaired, but it teaches us far more about what cities can and should do to make themselves more accessible for all," said Dan Hill, executive director of futures at Future Cities Catapult.

"The project comes from a collaboration: Microsoft in Reading worked on the amazing 3D soundscape technology, built into wearables, Guide Dogs provided in-depth understanding of how visually-impaired people experience the city, and at the Future Cities Catapult, we developed the ground-breaking human-centred design research for the project, working with Superflux, Arup Foresight, the Royal College of Art and the Bartlett's Centre for Advanced Spatial Analysis."

To provide the information for the device, cloud-based location and navigation data is collected using a Microsoft Windows smartphone which is connected to the headset via Bluetooth.

A user can programme their route into Microsoft's Bing maps and the headset will then offer them audio guidance. It can also interact with a network of information beacons placed around urban areas.

These beacons can relay messages including how long it will take for a bus to arrive and other journey details.

"We're focused on understanding how technologies like the Internet of Things will really play out in the city, how they will materially change our streets, what we do in them, and, in this case, the way we move around them," explained Hill, who is also a columnist for Dezeen.

"This demonstrator suggests incredible potential for technology to make the city more accessible for visually impaired people – in the UK 70% of registered blind are unemployed, in part, because the city is often rendered inaccessible to them – but all of us might benefit from designers and planners having a better understanding of how people actually experience the city, and from new services, augmented by tech, which make new kinds of mobility possible."

During development, Microsoft spent two years working with Guide Dogs to understand the needs of potential users of the device and trialling the headset with different users.

"People living with sight loss face a multitude of challenges every day that can prevent them from getting where they want to be in life," added Jenny Cook, head of strategy and research at Guide Dogs. "Currently, visiting a new city is often daunting, even for people with enough confidence to tackle the challenge independently."

"By working with people who are living with sight loss and developing a deep understanding of the challenges they face, we've shown that the right technology can empower people," said Cook.