Concrete Tableware is a series of flat modular forms designed as chopping boards, trivets and centrepieces for the table, or simply as artwork. 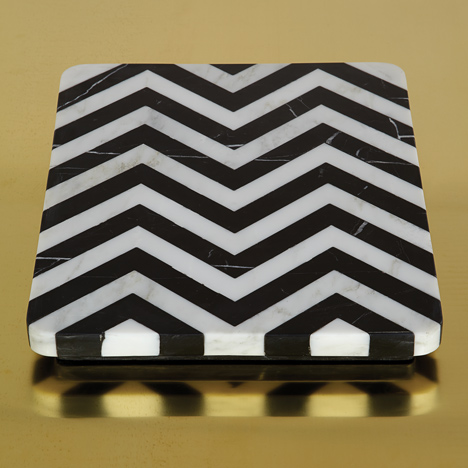 "The idea came from concrete tiles," Giardino told Dezeen. "Just by making them in different shapes, they become modular. It's still a tile, but you can also make visual landscape backgrounds for the food."

The concrete mixture includes added polymers, and is formed into shapes including circles with various diameters and a range of asymmetric polygons.

The pigment is added while the concrete is wet to achieve different visual effects – watercolour paintings, streaked marble or brush strokes that appear to be painted across the surfaces – once the material sets.

"I use various techniques for mixing the pigment with concrete," said the designer. "Sometimes it looks more like watercolour, sometimes a marble effect."

A sealing agent is used to make the plates waterproof and heat resistant, as well as prevent the pigments from rubbing off and making them safe to prepare food on.

"The idea of using colour comes from our relationship with food - it's about transferring the sensorial feelings from the food to the tableware," said Giardino.