News: two steel bolts have broken on Richard Rogers' Leadenhall Building in London, causing the area around the base of building to be cordoned off to pedestrians despite assurances that the building remains safe.

A section of a bolt – reported to be the size of an adult arm – came loose and fell from the Leandenhall Building, designed by Rogers Stirk Harbour + Partners and nicknamed the Cheesegrater for its distinctive sloping profile. 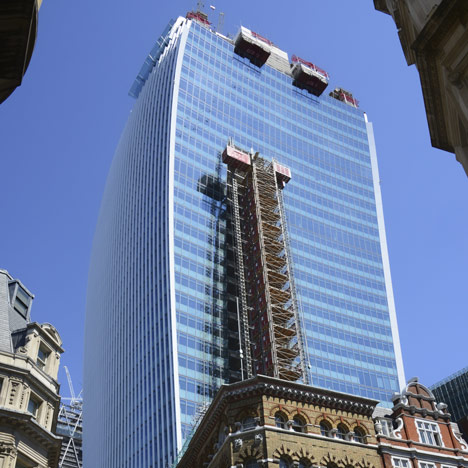 No one was injured when the bolt landed in a hoarding area to the side of the 47-storey tower yesterday, but its developer, real estate company British Land, has cordoned off the area around the base of the building as a safety precaution.

Part of a second bolt also came away from the node that connected it to the steel frame and glass structure earlier this week, but remained contained within the building.

In a statement, British Land confirmed that two bolts had broken but said there is "no risk to the structural integrity of the building".

However the area around 122 Leadenhall Street will remain off-limits to pedestrians while structural checks take place. Contractor Laing O'Rourke and structural engineers Arup are currently leading the investigation.

The Leandenhall Building officially opened in September and is the tallest in the City of London. Its shape was designed to preserve views of St Paul's Cathedral.

Following its completion, British architecture magazine the Architects' Journal reported that Rogers Stirk Harbour was in negotiations to relocate its studio to the Leadenhall Building, after the lease expires on its west London home in 2016.

Rogers Stirk Harbour + Partners has been contacted for a statement.

Another of the city's towers, Rafael Viñoly's Walkie Talkie at 20 Fenchurch Street, hit the headlines last year after its concave facade focused sunlight onto a vehicle parked nearby and melted part of its bodywork.