From today, the London-based studio will drop the surnames of partners from its branding and be known only by the letters RSHP.

It comes after Rogers, who co-founded the practice in 1977 under the name Richard Rogers Partnership, passed away in December 2021 at the age of 88.

British-Italian architect Rogers was one of the industry's best-known figures, winning all of architecture's top honours during a career that saw him attain worldwide acclaim for pioneering the high-tech style on projects such as the Centre Pompidou in Paris and the Lloyd's building in London.

He retired from his firm, which in 2007 rebranded as Rogers Stirk Harbour + Partners to incorporate the names of partners Graham Stirk and Ivan Harbour, in September 2020. The studio's founding constitution required that his name be dropped from the practice within two years of stepping down.

"As we come to terms with the loss of Richard, we are inspired to carry on the guiding principles of the practice he founded," said Stirk.

"Richard's vision was always for a practice that drew on many talents, and that is what we will continue to do as RSHP," he added. "A strong, diverse, international team working with an array of exceptional clients, all around the world."

"The focus on the letters is a move to underline the fact it's a collaborative effort, it's less about the individual and more about the collective and the team," RSHP partner Stephen Barrett told Dezeen. 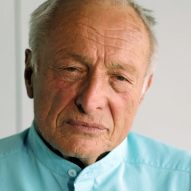 Headquartered in the Leadenhall Building in London that it designed, RSHP is often associated with innovative projects incorporating bright colours and exposed steelwork.

The studio also places heavy emphasis on ethical practice and social impact, per its constitution written by Rogers in 1990.

"The practice of architecture is inseparable from the social and economic values of the individuals who practise it and the society which sustains it," the constitution reads.

"We as individuals are responsible for contributing to the sustainability of our environment, to the society in which we practise and to the welfare of the team with whom we work."

A share of profits made by the firm go to charitable causes, as well as its 180 employees spread across London, Paris, Melbourne, Sydney, Shanghai and Shenzhen.

RSHP is currently working on 44 projects in 15 different countries, including the Melbourne Metro and an extension to the British Library, while it will soon open an office in New York.

Among studio's recent projects featured on Dezeen are a major-mixed use development in Seoul adorned with red steel detailing and an airport terminal in Geneva.

This week, it was reported that RSHP has been hired to investigate turning the seminal Lloyd's building into a hotel for owners Ping An.