News: the first Finlandia Prize for Architecture has been awarded to the Museum of the History of Polish Jews, by Helsinki firm Lahdelma & Mahlamäki Architects.

Launched this year by the Finnish Association of Architects (SAFA), the Finlandia Prize for Architecture honours an exemplary building from the past three years by a Finnish architect or built in Finland. 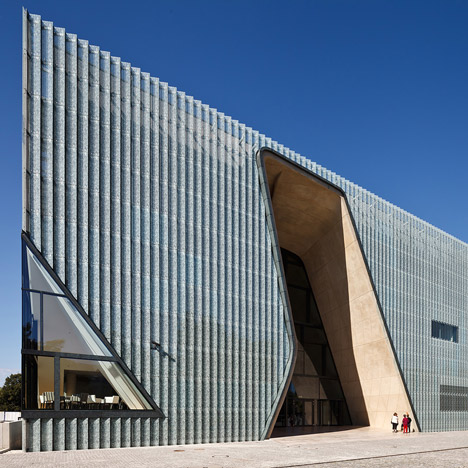 Museum of the History of Polish Jews by Lahdelma & Mahlamäki Architects

Lahdelma & Mahlamäki's Museum of the History of Polish Jews in Warsaw was the only building outside of Finland on the four-strong shortlist, chosen by a jury of architecture experts including Juulia Kauste, director of the Museum of Finnish Architecture, and Jorma Mukala, editor-in-chief of the Finnish Architectural Review.

The three other buildings were Gösta's Pavilion in Mänttä by MX_SI and Huttunen-Lipasti-Pakkanen Architects, the Seinäjoki Public Library by JKMM Architects, and Kaisa House, the main library for Helsinki University by Anttinen Oiva Architects.

Sixten Korkman, an economics professor at Aalto University, was asked to act as a "layman" judge and chose the overall winner.

"On the outside, the Museum of the History of Polish Jews is like a big box, which is not in itself very exciting as a shape. Its glass exterior makes the building appear light, and the carefully considered details provide a contrast to the uniformity of the design," said Korkman.

"The building's modest and restrained appearance, when experienced on-site, feels like absolutely the right approach to take, considering its use. It is an approach that respects the history and tragic fate of the Polish Jews."

The Museum of the History of Polish Jews, designed in collaboration with Polish firm Kuryłowicz & Associates, occupies a site on the former Second World War Warsaw Ghetto, adjacent to the memorial commemorating the Warsaw Ghetto Uprising of 1943. The building is used for a combination of research, education, exhibitions and culture relating to the Jewish heritage.

A large, cavernous entrance hall cuts through the entire building, with bulbous curving walls extending up the full height of the space. These rendered surfaces have a smooth appearance achieved using a spraying application technique, while the floors are made from travertine stone.

"To the best of our knowledge it is the biggest uniform, geometrically double-curving surface that has ever been realised," said architect Rainer Mahlamäki. "The design of the curved walls, which are bearing structures, was particularly challenging."

"The mood of the building is solemn and dignified, but at the same time warm and optimistic," said Korkman. "Familiarisation with the surrounding building stock leads to the idea that we are dealing with more than just a museum: this building is a powerful and significant work of art that will change the look of Warsaw as a whole."

The Finlandia Prize for Architecture is intended to be the architectural equivalent of the prestigious annual Finlandia Prize for Literature, which was founded in the 1980s. It can be given to any architect for a project located in Finland or a Finnish architect who has completed a building or refurbishment scheme abroad.