Movie: London designer Ross Lovegrove explains how Moroso helped boost his career in the second of our exclusive video interviews filmed for the Italian furniture brand.

"When I first started on my own in 1990, Patrizia [Moroso, creative director of the company,] gave me a chance," Lovegrove reveals in the movie, which was filmed at the Moroso Loves London exhibition during London Design Festival celebrating work by Moroso's London-based designers.

"What I like about Patrizia  is that she's always seen something very special in here in London and she's supported a lot of up-and-coming people," he says. "If you look at the designers that have been identified by Moroso, there's a really good balance."

Lovegrove's first product for Moroso was a range of sofas with M-shaped arm rests. 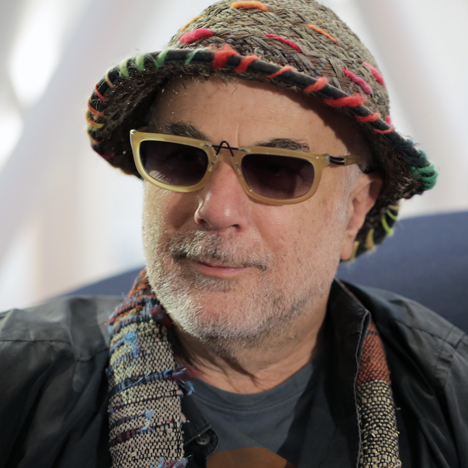 "I did this sofa system called M," he explains. "I just wanted to design something that, if you were meeting your bank manager, you wouldn't have to flop your way out of. And actually at home it's still the sofa I sit on after the best part of 24 years."

"Part of the lineage of my philosophy is to draw references and influences from things that have taken a long time to evolve," he explains. "[Natural organisms have] become very succinct in their material use. They're lightweight, dematerialised."

He continues: "[Diatom] is informed by nature because it's absolutely minimum material, maximum object. I love the idea of a vertical stack through itself. We 3D-printed models in the studio and it just worked beautifully."

Lovegrove similarly focussed on reducing material use in his 2005 Supernatural collection for Moroso.

"The Supernatural chair was a bit of a breakthrough," he says. "Polymers have really advanced in the last decade and my ambition was to do the lightest [chair] that I could."

"The holes are not there for decoration, they are actually there to liberate the material. I'm not interested in decoration particularly as a superficial thing."

This movie was filmed at the Moroso Loves London exhibition at Moroso's London showroom on Rosebery Avenue.

We'll be publishing more video interviews with designers featured in the exhibition over the coming days.

Watch all the movies »