Matali Crasset created the pieces during a workshop in Zimbabwe, named Basket Case II, with craftspeople from the Bulawayo Home Industries – a social scheme financed by the city of Bulawayo to help unemployed women learn a specific craft.

Crasset worked with 17 women and a master weaver for one week to create the collection of irregularly shaped vessels, based on a type of basketry traditionally made in the southern African country.

This was the second workshop that the group spent developing the traditional gourd shape, following another held in 2011. 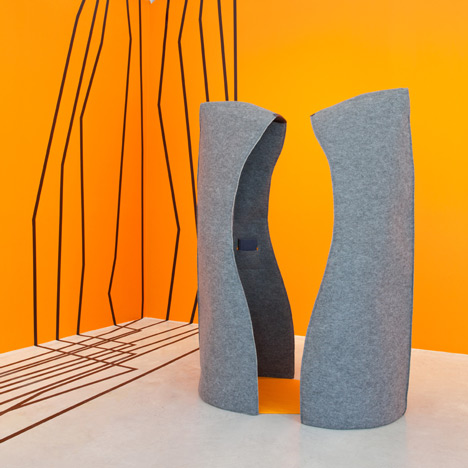 Voyage to Uchronia by Matali Crasset at Galerie Thaddaeus Ropac

"I wanted to focus the workshop on evolving this emblematic gourd basket shape made by the community three years ago for the first exhibition, Basket Case I: the gourd," said Crasset.

The Gourd's Family includes a mixture of functional and decorative items including a mirror, a basket and a series of vases with several drooping udder-like compartments.

The pieces are made from closely knit natural fibres called inqwanga, used for the structure, and ilala palm leaves for the form.

"The Gourd's Family collection is a system based on the repetition of a form in several sizes, like a vegetal growing system," said the designer, whose recent projects include a renovation of a French culinary school.

"I love this object as it's inexact and you feel that one person gave their time and their consideration, basically making one-of-a-kind objects each time," she added.

A small circular mirror inserted on top of one sculptural object gives it a functional and aesthetic purpose.

"I proposed them to realise functional pieces and more aesthetic ones which are just organic shapes," said the designer.

Other forms, shaped like deflated balloons, become the handles for a basket or the legs of a small table.

"Some are more inspirational than others and some are more practical, but they create a family which is limitless," said Crasset.

A small piece of sap-green thread is incorporated into the circular opening of one of the more ornamental items.

The collection is on show at the National gallery of Zimbabwe until 15 December.