Swedish German design firm Kram/Weisshaar has teamed up with car brand Audi to design and develop a "micro-sharing initiative" to encourage drivers in Stockholm to share their cars (+ slideshow).

The design studio led by Munich-based Clemens Weisshaar and Stockholm-based Reed Kram has designed the Audi unite scheme to allow groups of up to five people to share one Audi car using a booking app. 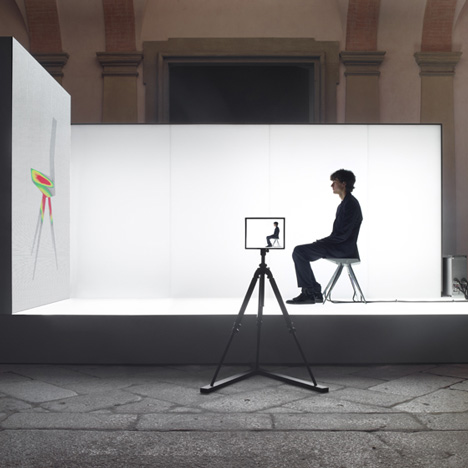 The project, aimed at making car ownership more efficient, was initiated by Audi, who approached the studio in 2013 with a brief to "realise an entirely new model of micro-sharing" that would "reinvent the business model of car ownership".

"Developing a virtual product and process like unite involves financial product design, agressive iterative testing and development of hard- and software, user interface design, communication design, art direction of ad campaign and dissemination strategy and so on," explained Celemens Weisshaar. "We deliver all of the above turn keys to a corporation like Audi that benefits from an accelerated pace that is owed to orchestrating these things all in parallel."

Over the course of a year, the designers developed an app and a beacon system that allows groups of users to book access to a shared vehicle that recognises individual users.

As well as allowing users to reserve their car for specific periods, the Audi unite app displays the car's current location and fuel levels. A 24/7 hotline also provides emergency support via the app and a dedicated social chat platform allows each group of car sharers to communicate privately between themselves.

"Each unite member gets a personal Audi unite beacon, part of an in-car system that recognises when unite members are in the car, allowing for seamless processes and easy cost-sharing," said a statement from Kram/Weisshaar.

A micro-computer in a black case is hidden in the body of the car and connects remotely to each driver's "beacon" – a small round black tag that can be attached to a keyring – using Bluetooth technology. The tag contains a digital signature that is unique to each user and keeps a record of their car usage using data collected by the computer.

Each user receives a monthly bill for their portion of costs related to maintenance, cleaning, tyre replacement and insurance as well as their fuel usage and any congestion charges based on individual mileage.

The scheme is launching in Stockholm, following trials with a fleet of cars and 38 local drivers.

"Over the course of one year, Kram/Weisshaar and Audi engaged in the simultaneous design, prototyping and user-testing of increasingly refined microsharing prototypes in Stockholm itself," explained the studio.

"User experience was a central concern of Audi unite from the earliest creative briefs; initial prototypes were secretly tested with a fleet of 12 Audis on the streets of Stockholm."

The multi-disciplinary studio has also designed the media campaign and branding for the launch of the Audi unite programme, with billboards posted on Stockholm's Tunnelbanen underground transport system featuring portraits of the scheme's beta testers.

Digital car sharing has been growing in popularity, with existing services including the Uber taxi app, ride sharing system Lyft and car sharing service RelayRydes. These have predominantly been produced by technology startup companies, rather than design firms.

Kram/Weisshaar was approached by Audi because it could deliver both the hardware and software development as well as the more obvious design aspects of the products, branding and marketing, according to Weisshaar.

"At Kram/Weisshaar we have from the beginning on been designing as well as implementing multi modal projects – starting with the in-store technology for Prada's epicenter stores in 2001 where we not only designed but also produced and implemented hardware and software of the media elements," explained Weisshaar, whose co-founder Reed Kram was a founding member of the Aesthetics and Computation Group at the MIT Media Lab.

"Reed's MIT background also means that we have from the beginning been as much a tech company as a design firm and we are capable of iteratively developing integrated tech solutions along with the product and GUI [graphical user interface] design as well as the communication around the project," he added. "Some of these aspects we don't communicate in the design world because it tends to confuse people."