This cavernous copper-clad library was designed by JKMM Architects for Alvar Aalto's historic Seinäjoki civic centre, and was one of three runners up from the first Finlandia Prize for Architecture (+ slideshow).

Completed in 2013, the Seinäjoki City Library joins a complex of public buildings designed by Finnish architect Alvar Aalto for the small town in western Finland, including the original fan-shaped library completed in 1965. 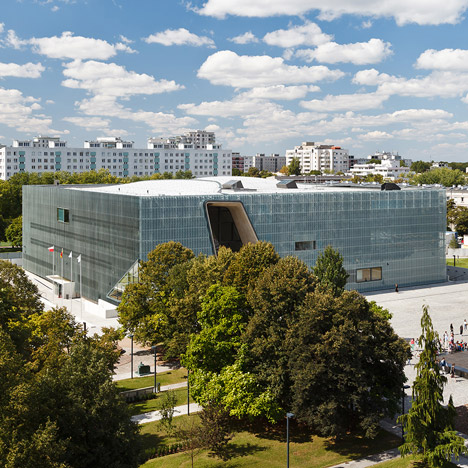 This old structure had become too small to house all of the library's activities, so Helsinki-based JKMM Architects was commissioned to create a more modern second building to accommodate new reading rooms and stacks.

"The key point of reference for the new library design was its location in the valuable environment of the civic centre created by Aalto," explained Asmo Jaaksi, one of the four founders of JKMM Architects.

"The aim was to initiate a dialogue between the new and the old part," he continued. "The new building must respect the protected cultural environment while making a bold statement as a piece of modern architecture – in other words, find the right balance between being conciliatory and challenging."

The main body of the library is composed of three angular volumes that are orientated in different directions. Each one has a gently sloping roofline that corresponds with the profiles of the neighbouring Aalto-designed structures.

External walls are clad with copper panels featuring shapes reminiscent of leaves. Entrances are emphasised by deep white recesses, while large expanses of glazing allow views straight through to the interior.

"Dividing the new building into three sculpture-like sections was an important insight that helped to reconcile its large volume with the scale of the civic centre," said Jaaksi.

"The building thus relates to its surroundings, and a different statuesque aspect of it is revealed from each direction," he added.

Internally, the library features a raw concrete ceiling that zigzags up and down to frame different sections of the space, as well as an underground tunnel that offers a connection between the new and old buildings.

At the heart of the space, a grand staircase descends down below ground level to create an informal seating area that can double up as a performance space or lecture hall. The team describe this as the "central reading terrace".

"The terrace underlines two important themes of the interior: the significance of providing a place for encounters, and a functional link between the new and the old building," stated the architect.

"The gradually descending, interlinked spaces are a connection with the sunken areas typical of libraries designed by Aalto – the purpose of which was to give visitors an unobstructed view over the bookcases."

Curved openings puncture the walls and are lined with carpet, offering protected spaces where both adults and children can sit down with a book.

This theme continues in the children's library, where hollow box-shaped bookshelves create sheltered nooks for reading and play, while more typical seating areas are dotted around the stacks in the main reading hall.

A quiet study room occupies a narrow triangular room tucked away between these spaces. The wall and ceiling of this room are bare concrete, displaying the markings of a wooden formwork.

"The visual look is dominated by cast concrete surfaces aiming for an unfussy, rough feel produced by using uneven plank moulds and by leaving the surfaces unfinished after casting," said Jaaksi.

A large expanse of concrete also forms the ceiling in the main entrance hall – a space that accommodates a reception, a cafe and a magazine area. Here, the rough surface is interrupted by a large blue artwork that provides acoustic dampening.

To minimise the need for mechanical cooling, all large windows face north to reduce thermal load from the sun.

The Seinäjoki City Library was one of four projects shortlisted for the first Finlandia Prize, which will be awarded every three years to a project either by a Finnish architect or built in Finland. The winner was a museum in Warsaw dedicated to the history of Polish Jews.

Photography is by Tuomas Uusheimo, apart from where otherwise indicated.