News: Eurostar has revealed a fleet of trains by Italian transport design studio Pininfarina that will serve a new range of European cities, marking the cross-channel rail service's 20th anniversary. 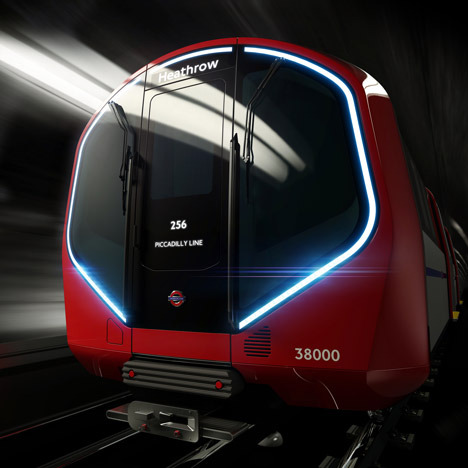 Eurostar e320, named after its top speed of 320 kilometres-per-hour (200 miles-per-hour), will go into commercial service at the end of 2015 in time to operate on extended routes to Belgium and the Netherlands – due to commence a year later.

"The trains have a new livery, a fantastic interior, 20 per cent more seats and offer Wi-Fi across the train. We've also doubled the amount of seats for wheelchair users," said Eurostar chief executive Nicolas Petrovic, at St Pancras this morning.

Pininfarina, which has worked with car manufacturers Ferrari and Maserati, designed the train with reclining seats and increased luggage storage, plug sockets and mirrors in seat backs and touch sensitive light controls that "combine elegance with functionality" in Business Premier class.

"The brief was to have more seats, but at the same adding more comfort, which at the beginning seems to be a paradox," Pininfarina creative director Fabio Filippini told Dezeen.

"We tried to give overall a very coherent and cosy feeling through the train, independent of the class, to give more personal feeling to the space of the customers."

In the buffet car, a curved white bar with rounded corners gives a "subtle sense of elegance" to the space.

"The combination of bold design, chic interiors and Wi-Fi connectivity will raise the bar, providing an unprecedented level of style and comfort for our customers," said Petrovic.

Free Wi-Fi will be available to all passengers, on which a new digital portal will provide information and entertainment including live news feeds, weather reports and Eurostar destination guides.

Pininfarina also added a range of grey and blue-toned seats to help "every customer feel their personal space."

"It's functional – you go to the toilet, you come back and you remember you're in this one, not the blue one," said Filippini.

The new fleet of 17 trains – seven more than are currently in circulation – will each be capable of carrying 900 passengers, boosting current capacity by 20 per cent.

Pininfarina, which recently launched a 1930s-style bicycle, is also refurbishing the existing train interiors by French designer Philippe Starck, so the designs match across the fleet.

Eurostar describes the trains as "inter-operable", with the ability to operate across the diverse Euorpean signalling systems, opening up the possibility to provide high-speed train services between the UK and other European city centre destinations.

Expanding on its current routes between the UK, Paris, Brussels, Lille, the French and Swiss Alps and Geneva, the new trains will operate a new year-round service to Provence, Lyon, Avignon and Marseille by May 2015.

Direct routes to Amsterdam with stops in Antwerp, Rotterdam and Schiphol are set to start late 2016.