London-based interior designer Christopher Jenner unveiled designs for the standard and business class ticket offices for the Eurostar terminal in St Pancras station this week, with the aim of creating a "less pedestrian travel experience".

Furniture and fittings for both spaces have been styled to incorporate materials and shapes common in the late 19th and early 20th century.

"Art Nouveau and Victorian Gothic design principles are expressed through a narrative of craft,
heralding a return to the Golden Age of travel," said an official statement about the project. 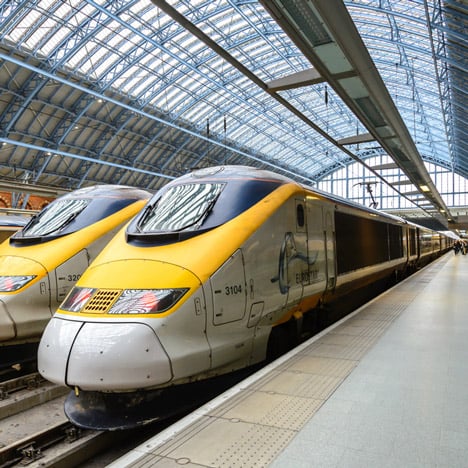 "Essentially our motivation was to design a more crafted experience for the travel industry," Jenner told Dezeen. "A good travel brand is judged by how it responds to its clients' needs. We've designed a space which is functional, yet embodies the narrative of connection and journey within its DNA."

A Venetian plaster wall in the business class office is interrupted with curvy panels of walnut edged in brass. The same combination of wood and metal is used for the cabinetry, and bespoke blown-glass lampshades are suspended over the ticket desk made of formed Corian edged with wood.

A 30-metre-long hand-drawn illustration of the journey from London to Paris is recreated on photo-etched stainless steel to cover the main walls of the standard class office. Curved desks are formed out of Corian, edged in steel and English oak.

Limestone has been used to create new flooring for both spaces, which will retain their glazed frontages.

"Their evolution was timed alongside the advent of mass transportation. Both movements responded to this need in vastly different ways, yet they shared common values. These values – fluidity, organic, enriched and symbolic – were key inspiration points in the development of the design."

The London Ticket Hall is the South African-born designer's first major project to be unveiled for Eurostar since he was appointed creative director for the high speed train service in October 2013.

Prior to his appointment, Jenner developed a concept for the cabin interior of one of the firm's trains with individual seats covered in yellow quilted fabric, and a mix of hardwood and carbon fibre surfaces.

Jenner's designs are a significant departure from the aesthetic created by Eurostar's previous creative director – prolific French designer Philippe Stark – who was brought in to oversee a redesign of the firm's train interiors, terminals, check-in lounges, signage, uniforms and cutlery in 2001, remaining with the company as a consultant until 2005.

"When a brand embraces a clearly defined design strategy, and the use of considered craftsmanship, the results can seem refreshingly radical," said Jenner. "We have repeatedly implemented the same strategic approach across our client portfolio, and each time the results have been encouraging."