Warsaw collective Pangenerator has designed a digital necklace formed using light patterns that are projected onto the wearer's body via their phone (+ movie).

Pangenerator created a custom iPhone app to generate the illuminated patterns that form the Neclumi. 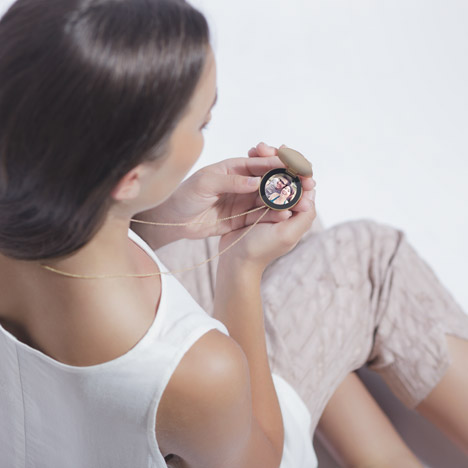 Purple locket is a digital version of the traditional heirloom

The phone connects via a High-Definition Multimedia Interface (HDMI) cable to a "picoprojector" – a type of small handheld projector – attached to the wearer's chest, which shines the light onto their neck.

"If we're having less and less in terms of physical goods, for example music streaming instead of CDs and e-books instead of paper copies, the same logic might be applied to other areas like jewellery," the designers told Dezeen.

"Could we focus on abstract aesthetic values instead of physical form and economic worth? Are we willing to abandon atoms of gold for waves of light?"

Four dynamic options, which respond to different inputs measured by the phone's built-in features and gyroscope, can be selected via the app.

Airo reacts to walking speed using a pedometer and Movi responds to body movement via the accelerometer.

Roto changes in response to the rotation of the wearer's body by employing the phone's compass and Sono reacts to ambient sound through the microphone.

"Given the rate of miniaturisation of picoprojector technology and the trend for wearable technology being treated more as jewellery and fashion accessories rather than just gadgets, we predict that wearable projection and projection-based jewellery will become a reality in a few years," said the designers.

Pangenerator comprises Piotr Barszczewski, Krzysztof Cybulski, Krzysztof Goliński and Jakub Koźniewski. Previous projects include a collection of small, vacuum formed tetrahedrons with LEDs inside, which respond to light or shadow in their immediate surroundings and create waves of light when arranged in groups.