For the interior of the Old Tom & English restaurant and cocktail bar, which opens today in central London, Lee Broom aimed to recreate the atmosphere of attending a "raucous" dinner party. 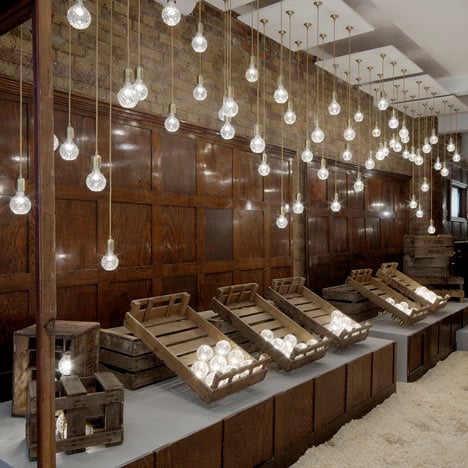 Each room is named after a prostitute – including Lulu, Nell, Chora and Cynthia – in reference to Soho's historic role as the centre of London's sex trade.

"They're all named after famous prostitutes and madames," Broom told Dezeen. "The venue is called Old Tom & English because they specialise in old gin recipes, but also Tom is slang for prostitute – particularly in the police force."

"Because that scene in Soho is slowly disappearing, we wanted to pay homage," he explained.

After entering into a small entrance lobby from Wardour Street, visitors descend a staircase into the red-carpeted basement space that is owned by a pair of local restauranteurs.

"We wanted to create a space that was more like going into somebody's apartment," said Broom. "When you come in it's like going to a friend's house for a cocktail or dinner party."

The oak-panelled bar is topped with a marble counter, with a sink for cooling champagne discreetly cut out from the surface at one end.

Glass vitrines display bottles and decanters that hold the syrups and spirits used to make the cocktails.

The bar area leads through to the main dining "lounge", where tables are positioned between sofas and in front of a circular fireplace with a bespoke marble surround and plinths either side.

More vertical oak strips line the back wall, where a large round mirror is propped up on top of the fireplace. Mid-century walnut bar carts tucked into the corners of the space act as stations to stock and serve drinks from.

"It's really intimate, then towards the end of the evening it starts to get a bit more raucous," said Broom.

The rest of the furniture is from Broom's various ranges, including the marble Nouveau Rebel pieces launched during this year's London Design Festival and grey upholstered sofas originally designed for London furniture store Heal's.

Versions of the OLO light launched in 2010 have been produced in walnut to match the vintage storage cabinets.

Alcoves with vaulted ceilings, to the side of the main space and on the other side of the bar, contain more private dining areas for larger parties.

In one of the smaller bunker-like nooks, a cut-crystal bulb illuminates when drinks are ready to alert diners to collect them from a hatch hidden behind a cabinet that links to the bar.