Ken Nakagaki's Comppass draws simple shapes created as digital files onto paper in a similar way to how a conventional compass draws a circle. 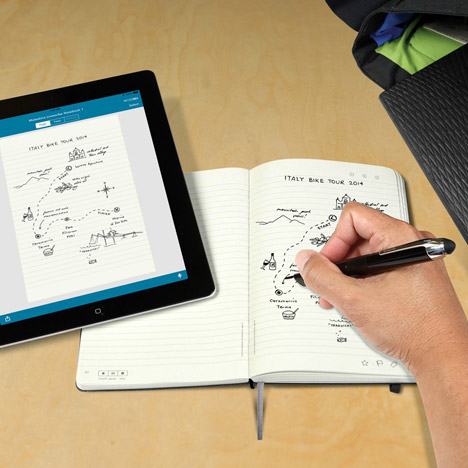 "The initial idea came from simple curiosity – how would it feel to draw a square with a compass?" Nakagaki told Dezeen.

A two-piece arm slides back and forth parallel to the drawing surface along a pair of metal rods.

With one end fixed into the paper with a spike, the pencil lead at the other end of the arm moves in the programmed shape independently as the rods are rotated 360 degrees by the user.

This movement allows for any number of shapes within a range of diameters to be drawn in the same way a conventional compass creates a circle.

The Comppass can be programmed to draw a range of digitally created shapes, and can also be used to "copy and paste" shapes from the physical world, either by taking measurements or tracing them freehand.

The shapes are then converted into a digital file that the Comppass can draw onto paper, creating a replica of the original.

It can do the same with three-dimensional objects, converting the measurements into a net, which can be drawn, cut out and folded into a replica of the 3D shape.

A blade attached in place of the pencil, enables shapes to be cut from as well as drawn onto paper or card.

"Down the ages, people have been used rulers or compasses to draw precise figures with their own hands," said Nakagaki.

"On the other hand, as computers developed, CAD software has enabled us to draw precise figures and duplicate them easily on the display. But these systems lack the intuitiveness of drawing on paper. We needed a drawing tool that included the advantages of both digital and manual."

The prototype device, made of 3D-printed ABS resin, contains a rotary encoder to detect the rotation angle, a servomotor to regulate the radius of a pen, LEDs, a switch, and a micro controller. A Bluetooth module enables wireless communication with other devices.

Currently completing a masters degree at the Massachusetts Institute of Technology (MIT)'s Media Lab, Nakagaki developed the project while studying at the Yasuaki Kakehi Lab – part of Keio University in Japan.

Comppass was shortlisted for this year's James Dyson Foundation Award, which honours projects that offer innovative solutions to common problems.