Replacing the dilapidated Pier 54, the 10,000-square-metre Pier 55 is conceived as an undulating landscape of performance venues and planting, built over a cluster of mushroom-shaped columns 56 metres off the Hudson River shoreline. 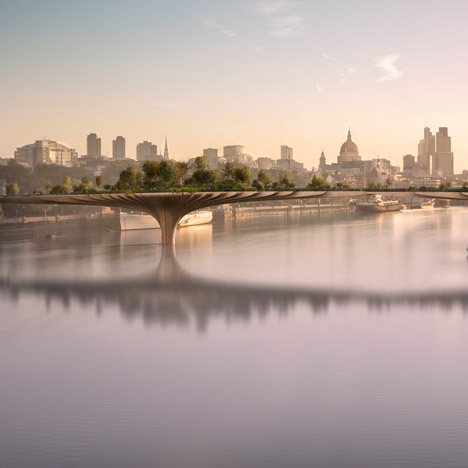 Heatherwick Studio is working with landscape architect Mathews Nielsen on the $130 million (£83 million) project, the majority of which will be funded from a donation by media mogul Barry Diller and his wife, fashion designer Diane von Furstenberg.

The couple have pledged to contribute $113 million (£72 million) to build the floating park – the largest private donation to a public park in New York history.

The rest will be financed by state and city funding, and the state has also committed to creating an expanded public esplanade along the waterfront.

Located west of 13th Street, the pier will form part of the four-mile-long Hudson River Park that has been under development since 1998.

Described as a "treasure island", it will include a 700-seat amphitheatre imagined as a performance space for music, dance, theatre and public art.

"When I was little I used to come to Manhattan to visit my great aunt who lived here and never forgot being driven down the West Side Highway and seeing the fields of disused pile heads sticking out of the river," said Heatherwick, who this year also completed a gin distillery and visitor centre.

"All these years later, my studio and I are honoured to now be growing another set of river piles in the midst of these historic ones to hold up a new phenomenal public park with special spaces for performances," he said.

Nielsen, who also designed the Tribeca section of the Hudson River Park, said Pier 55 will be unlike any other pier along the Hudson. "Unexpected topography and captivating spaces will create physical, visual and cultural experiences found nowhere else in the city, much less on the waterfront."

"The drama and delight of the landscape will make this a magnificent destination that will define a new paradigm of public parks," he added.

Construction of the pier is scheduled to commence in 2016.

Its erection, operation and cultural programme will all be managed by Pier55 Inc, a new non-profit organisation established by Diller and Von Furstenberg, and including film and theatre producer Scott Rudin.

"We decided early on that the programming for the park – and the design of the park itself – should be ambitious in every way," said Diller, who is best known as the creator of Fox Broadcasting Company and USA Broadcasting.

"If the pier when completed is anywhere as much sheer fun, strife, stimulation and joy as it has been conceptualising it, then it will exceed my wildest expectations," he said.

"New York has always reminded me of Venice, so I am happy the time has come to properly honour its waterways," added Von Furstenberg.

"What better than a park on the city's western bank to rest, watch a sunset or a performance?"

The pier is expected to open to the public in late 2019.

Images are by Luxigon.